The End of an Institution 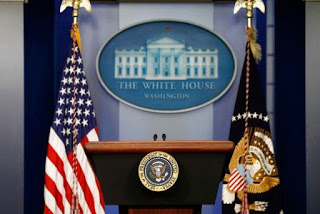 Facebook
Twitter
Pinterest
WhatsApp
The White House Press Briefing Room as we know it, will soon be no more. Its replacement will be four times as large and it will located at the White House Conference Center, across the street from the White House. Plans are being drawn up as I type.

Currently, the James S. Brady Press Briefing Room is a small theater in the West Wing of the White House. It is located between the workspace assigned to the White House press corps and the office of the Press Secretary.

The White House press corps will no longer have offices in the White House. They can make do as best they can at a small dedicated area in the Conference center. CNN is furious. MSNBC is having grand mall seizures, and the small boys think that it’s an improvement.

In the past, the Briefing Room was an exclusive club for the corrupt, progressive, smug, elite mainstream media types who were “Chief White House Correspondents” for their respective publications and media outlets. Seats were assigned by the White House Correspondents’ Association. The more elite members got the first questions every day and sat in the first two rows.
Soon there will be Skype (virtual) opportunities to ask questions. Bloggers can participate. Members of the public (up to 50) will be invited to the daily press briefing and the public can ask questions. They may even get the first few questions of the day depending on the whim of the White House Press Secretary. Without assigned seating it could be members of the public who are sitting up front. The monopoly is gone. Did I mention that the corrupt, elite, smug, progressive mainstream media isn’t happy?
The White House Press Corps used to travel on Air Force One. The number of newsies that will be invited in the future will be much smaller than it once was… The pool can charter an airplane if they want to trail along. Or they can charter a number of airplanes — up to them.
The press declared war on President Trump – then the empire strikes back… “First they ignore you, then they laugh at you, then they fight you, then you win.” – Mahatma Gandhi