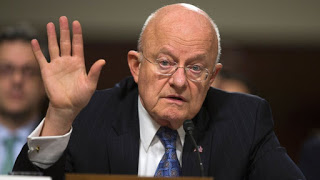 Facebook
Twitter
Pinterest
WhatsApp
Former Director of National Intelligence, General James Clapper, spoke on CNN last Monday, where he admitted that he and others are being investigated by Attorney General William Barr and U.S. Connecticut Attorney John Durham, for doing what former President Obama “told them to do.”
Asked if he is concerned if Attorney General William Barr or John Durham’s investigations will find wrongdoing and seek to punish former intelligence officials, James Clapper responded, “I don’t know. I don’t think there was any wrongdoing.”
Clapper, a perjurer, appeared before the Senate to discuss surveillance programs in the midst of a controversy over warrantless surveillance of the American public. He was asked directly, “Does the NSA collect any type of data at all on millions, or hundreds of millions of Americans?” There was no ambiguity or confusion and Clapper responded, “No, sir. … Not wittingly.” That was a lie and Clapper knew it when he said it. And the statute of limitations ran on that, so he won’t be prosecuted for THAT perjured testimony.
Today Jim Clapper is a CNN contributor and a darling of progressive left. And he’s likely the one that US Attorney Durham has testifying before the federal grand jury because he’s the weakest of the co-conspirators. He will lay out Barack Obama… and then the fun starts.
We don’t know what he’s telling the grand jury, but let’s review what he’s saying on CNN:

“And oh, by the way, hold off what the then Commander in Chief, President Obama told us to do, which was assemble all the reporting we could, that we had available to us, and put it in one report that the President could pass on to Congress and the next administration.”

“And while we’re at it, declassify as much as we possibly could to make it public, and that’s what we did,” he added. “It’s kind of disconcerting now to be investigated for having done our duty and what we were told to do by the President.”

“If it weren’t for President Obama, we might not have done the intelligence community assessment that we did that set off a whole sequence of events, which are still unfolding today, notably, Special Counsel Mueller’s investigation,” he said.

“President Obama is responsible for that and it was he who tasked us to do that intelligence community assessment (based on the Steel Dossier) in the first place,” Clapper admitted.