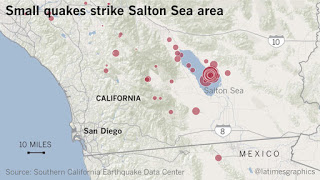 There has been a lot of talk in SoCal of an impending earthquake — a big one. The Salton Sea earthquake swarm – that the mainstream media didn’t mention because it’s been busy attacking Trump and glorifying Clinton – NON-FRIGGING-STOP,  came and went without much discussion.
A friend came up to me today and asked, “can I come to your house with my family if there’s a big earthquake because I know you can protect us?” I said, “bring food and water or you’re on your own.” Frankly, I don’t know long I would have to hold out against the inner city people (often referred to as ‘zombies’ as a matter of convenience), but I’d much rather be in AZ when the big one hits SoCal. And it will eventually.