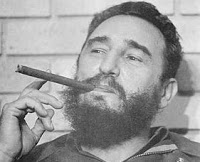 Facebook
Twitter
Pinterest
WhatsApp
Fidel Castro made his victorious post-revolution entry into Havana, Cuba on January 8, 1959. The next day, Castro’s regime began collecting guns and disarming the population “for their own good”. Fidel characterized himself as a father to the Cuban people. A loving father only wants what is best for his children and it is from the wellsprings of those concerns that he began a systematic confiscation of firearms.
You an read more here (LINK)

I appeal to the public to disarm the ambitious. Why are clandestine arms being stored at this very minute? Why are arms being hidden at distinct points of the capital? Why are arms being smuggled at this moment? I tell you that there are members of certain revolutionary organizations who are smuggling and storing arms. All the arms that were found by the rebel army are stored and locked in barracks, where they belong. What are these arms for? Against whom are they going to be used?

Are we going to practice daily shooting on the streets of the capital? Why do we need arms? Yet I tell you here and now that two days ago elements of certain organizations broke into the San Antonio barracks, which are under the jurisdiction of Commander Camilo Cienfuegos and also under my jurisdiction as commander in chief of the armed forces, and carried away 500 small arms, (16?) machine guns, and 80,000 cartridges. I wanted to tell you about this and make use of the influence exerted by public opinion so that those who are planning any criminal adventure will not be able to recruit any troops to follow them. The theft of the weapons cannot be justified, because this is not a dictatorship. We are never going to use force, because we belong to the people. Moreover, the day that the people do not want us we shall leave. As soon as possible I will take the rifles off the streets. There are no more enemies, there is no longer anything to fight against, and if some day any foreigner or any movement comes up against the revolution, all the people will fight. The weapons belong in the barracks. No one has the right to have private armies here.

Governments that disarm their people always
use the argument that it’s for the greater good.

A few days after the firearms confiscation had been completed, Castro began to execute political enemies. As father to the Cuban people, his enemies were naturally…their enemies, and the enemies of his patron, Soviet Russia.