The Terrorist Next Door

Scenario: Your next door neighbors are friends. They are white Americans who converted to Islam some years before and though they dress as traditional Muslims and though the father grows his beard long and proud, they are model citizens.

They are part of the local community and the only thing that seems to separate them from the rest of the neighborhood in any way is their faith. And freedom of religion is a Constitutionally guaranteed activity.

Then one day you wake to find the police and FBI are hauling weapons and explosives from the house.

Does that sound strange to you?  (The Indictment – CLICK HERE ) 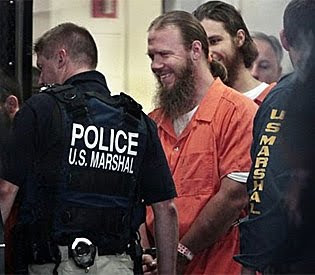 WILLOW SPRING, North Carolina — In a two-story house with a neat lawn, a lake and fruit trees in the back yard, the Boyd family lived a normal, quiet existence, neighbors say.

Daniel Boyd made a living as a contractor while his wife, Sabrina, stayed home with the family. Their oldest sons, Dylan and Zakariya, worked with their father. Their teenage son and daughter hung out with other kids in the neighborhood, fishing and playing badminton.

But in Johnston County, where people proudly fly the U.S. Flag and pack into churches every Sunday, the Boyds were different. They were devout Muslims and talked openly about their faith. Daniel Boyd wore a beard and long robes; his wife often dressed in long skirts and long-sleeved shirts.

Despite the religious and cultural differences, the Boyd family fit in well in Shadow Lakes subdivision, near the Wake County line, neighbors said. The family went to a Memorial Day picnic in the neighborhood. They took walks along the streets of the quaint community.

“I’ve never heard any gossip about them,” said Susan Bedwell, who lived next door to the Boyds. “If anybody said anything, it was something good.”

This would seem an unlikely place, and an unlikely family, to receive so much attention and scrutiny. But last week, Daniel Boyd, two of his sons and four other men were arrested after a three-year federal investigation. Authorities say the men were at the center of a plot to wage terrorism overseas. The charges brought national attention.

Johnston County Sheriff Steve Bizzell said his department played only a small role in the arrests. But the events, he said, bring to light a changing county, one that is becoming more diverse, more populated. “Nothing surprises me anymore,” Bizzell said.

The arrests were surprising — and devastating — to Norm and Susan Bedwell, who have lived in Shadow Lakes for 10 years. They befriended their neighbors when the Boyds moved next door to them five years ago.

“The more I think about it, the more I think something is not right about this story,” Susan Bedwell said. “The pieces do not fit. That’s not who they were.”

The Bedwells said they don’t believe Daniel Boyd and his sons, Dylan and Zakariya, are terrorists. Norm Bedwell used to talk to Daniel Boyd over the fence about religion. They politely respected each other’s differing faiths, Bedwell said.

The Boyds were always willing to help. When the Bedwells’ air conditioner broke, Daniel Boyd sent a friend to fix it. Sabrina Boyd brought chicken soup when one of the Bedwells was sick.

Tylur Gray, 17, built a tree house in the neighborhood last summer with his friends. When Daniel Boyd spotted what they were up to, Gray thought he and his friends were going to get in trouble. But instead, Boyd offered the kids wood and nails for the tree house. “He seemed really nice, actually,” Gray said. “Like someone who could just get along with people.”

The Boyd family had quite a journey before they ended up in Willow Spring. Daniel Boyd, who went to high school in Virginia, and his brother were accused of robbing a bank in Pakistan in the early 1990s. A higher court overturned the sentence, which was to be amputation of an arm and a leg. They moved back to the United States and settled in Massachusetts.

The Triangle’s growth, and need for contractors, brought Daniel Boyd and his family here. The Boyds liked the neighborhood.

For another article, see:  www.newsobserver.com/terrorism_investigation

There were people who felt the very same way about Major Nidal Hasan – a misunderstood jihadist. Until he murdered them in cold blood. No, I don’t know the Boyd family. However the circumstances of his life and his continuing activities as a jihadist are not in keeping with the best interests of the community. — CALL ME JADED. 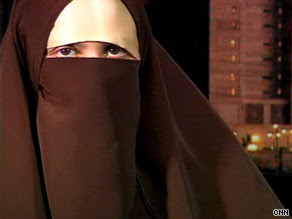 On Wednesday, July 22, 2009, a federal grand jury in the Eastern District of North Carolina returned a sealed seven-count indictment against the following defendants:

The defendants were arrested at various locations this morning by the FBI and other law enforcement agencies. They made their initial appearances today in federal court in Raleigh, N.C. At that time, the indictment was unsealed.

“The indictment alleges that Daniel Boyd is a veteran of terrorist training camps in Pakistan and Afghanistan who, over the past three years, has conspired with others in this country to recruit and help young men travel overseas in order to kill. Given the weapons allegedly involved in this conspiracy and the seriousness of the charges, the many agents, analysts, and prosecutors who were able to bring about this case and safely remove these defendants from our streets deserve special thanks,” said David Kris, Assistant Attorney General for the National Security Division.

“These charges hammer home the point that terrorists and their supporters are not confined to the remote regions of some far away land but can grow and fester right here at home. Terrorists and their supporters are relentless and constant in their efforts to hurt and kill innocent people across the globe. We must be equally relentless and constant in our efforts to stop them,” said U.S. Attorney George E.B. Holding.

“The threat that extremists and radicals pose to America and our allies has not dulled or gone away. These arrests today show there are people living among us, in our communities in North Carolina and around the U.S., that are honing their skills to carry out acts of murder and mayhem. Their ultimate goal is to wage war on freedom and democracy. The FBI and our law enforcement partners are doing all we can to stop them from thriving and successfully attacking again,” said Owen D. Harris, Special Agent in Charge of the Charlotte Division of the FBI. “We will remain vigilant, so must the public. If you see or hear something—act—call your local police department or the FBI. September 11th is not a vague memory for us, nor should it be for anyone.”

“The cooperation between federal, state and local authorities throughout this investigation has been outstanding. It is only with our ongoing law enforcement partnership through the Joint Terrorism Task Force in conjunction with North Carolina’s fusion center, ISAAC, that we are able to ensure public safety from these terrorist threats,” said North Carolina State Bureau of Investigation Director Robin P. Pendergraft.

According to the indictment, during the period from 1989 through 1992, Daniel Boyd traveled to Pakistan and Afghanistan where he received military-style training in terrorist training camps for the purpose of engaging in violent jihad. Following this training, he allegedly fought in Afghanistan.

From roughly November 2006 through at least July 2009, the indictment alleges that Daniel Boyd and the other defendants conspired to provide material support and resources to terrorists, including currency, training, transportation, and personnel. The defendants also conspired to murder, kidnap, maim, and injure persons abroad during this period. The object of the conspiracy, according to the indictment, was to advance violent jihad, including supporting and participating in terrorist activities abroad and committing acts of murder, kidnapping, or maiming persons abroad.

The indictment alleges that, as part of the conspiracy, the defendants prepared themselves to engage in violent jihad and were willing to die as martyrs. They also allegedly offered training in weapons and financing, and helped arrange overseas travel and contacts so others could wage violent jihadoverseas.

As part of the conspiracy, the indictment further alleges that the defendants raised money to support training efforts, disguised the destination of such monies from the donors, and obtained assault weapons to develop skills with the weapons. Some defendants also allegedly radicalized others to believe that violent jihad was a personal religious obligation.

Among other acts, the indictment alleges that Daniel Boyd traveled to Gaza in March 2006 and attempted to enter Palestine in order to introduce his son to individuals who also believed that violentjihad was a personal religious obligation. Later, in October 2006, defendant Ziyad Yaghi allegedly departed the United States for Jordan to engage in violent jihad.

In February 2008, Daniel Boyd allegedly solicited money to fund the travel of additional individuals overseas to engage in violent jihad and in March 2008, discussed with Anes Subasic preparations to send two individuals abroad for this purpose. He allegedly accepted $500 in cash from defendant Hysen Sherifi to be used to help fund jihad overseas and later showed Sherifi how to operate an AK-47 assault weapon.

In July 2008, Sharifi allegedly departed the United States for Kosovo to engage in violentjihad. According to the indictment, Sharifi later returned to North Carolina in April 2009, for the purpose of soliciting funds and personnel to support the mujihadeen.

The indictment also alleges that Daniel Boyd obtained a variety of weapons in furtherance of the conspiracy to murder persons overseas and provide material support to terrorists. These included a Bushmaster M4A3 rifle that Boyd allegedly received illegally via interstate commerce in 2006, as well as an ETA M16 V System C-MAG that he purchased in 2006. In 2007, he allegedly purchased a Ruger mini 14 long gun.

Finally, the indictment alleges that Daniel Boyd and several of the defendants practiced military tactics and the use of weapons on private property in Caswell County, N.C., in June and July 2009.

This investigation is being conducted by the Raleigh Joint Terrorism Task Force of the Charlotte Division of the FBI and NCISAAC, the North Carolina Information Sharing and Analysis Center.

The prosecution is being handled by Assistant U.S. Attorneys Barbara D. Kocher and Jason Cowley of the U.S. Attorney’s Office for the Eastern District of North Carolina, and Trial Attorney Jason Kellhofer, of the Counterterrorism Section in the Justice Department’s National Security Division.

The public is reminded that an indictment contains mere allegations. Defendants are presumed innocent unless and until proven guilty in a court of law.