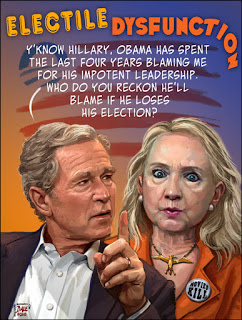 The old traditional mainstream media isn’t asking Barack anything and the ladies on “The View” simply want to bask in his aura. So I’ll join the blogging community to ask what all of the adults in the room should be asking.
1. Is it true that we can no longer borrow from China and Russia to keep our economy afloat and that you’ve led an effort to have the Federal Reserve borrow by buying our own bonds? How do you explain a robust American stock market without explaining that we are on the brink of a financial tsunami that makes the one “you inherited” look like a ripple in a bath tub?

2. You spent $787 billion to stimulate the US Economy. Essentially, you spent the equivalent of the Korean economy (in money that we could then borrow from China who no longer lends to us). The Korean economy supports 30 million jobs. You promised 3 million jobs. You didn’t produce any. Can you lay that at the feet of George W. Bush?
3. What tangible benefits to the United States has your Middle East policy produced? Has your goal of having NASA make Muslims feel good about themselves worked?
4. What specific role will Vice President Joe Biden play in the next Obama Administration. We know that he’s been the point man for job creation and for pulling American missile defense from Poland and Eastern Europe as a sop to your Russian allies. What do you have in store for him to do in the next four years?
5. Why haven’t you put a single budget in place for the past three years? Do you plan to put a budget in place for the remaining five years should you win the election?
6. How do you explain your personal fortune? How did you earn it and will you make your entire trove public? We know from the convention that you’re poor as a wharf rat. Who paid for your Harvard education?

7. This week, the world’s largest carmaker said electric cars are a joke, and a congressional report said federal subsidies paid for them are a waste. How do you square this with your plans to pour billions of taxpayer dollars into the development of electric cars in the form of grants, federal loans and tax credits.

8. Attorney General Eric Holder has been held in CONTEMPT of CONGRESS because he lied about his role in the Fast and Furious scandal. Do you plan to accept his resignation or to keep him in place during your next term in office?
9. Do you have any plans to do anything to secure America’s Southern Border over the next four years? If so, what and when do you plan to implement those measures?
10. Please explain SPECIFICALLY how you plan to reach across the Aisle to Republicans in the next four years to work with them to solve America’s daunting challenges?

What is the chance that any of these questions will be put to President Obama by the credentialed media during the upcoming debates?