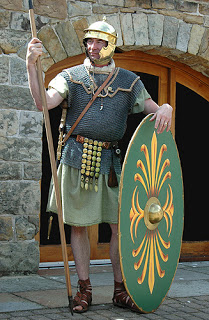 a fictional short
Militiades of Heraklion stood at ease on the ochre stones in the temple courtyard. The contubernium, or squad of eight soldiers to which he had been assigned, in the courtyard, changed position every horae for four and then rested for one before going on watch for another four. Marius, his decanus, was on his best behavior, and worked to keep Militiades and the rest on the squad sharp as well. If something was going to go wrong in Judea, it would go wrong during the Feast of the Passover. Even though Militiades felt that two contubernium was vastly insufficient, nobody had asked him nor was anyone likely to.

The lorica hamata of chainmail that he wore had been dragged by a horse though the sand only yesterday, and it shown brightly, completely free of rust. He’d sharpened the semispathium now hanging at his side to the limits of the metal to hold an edge. He’d polished his cassus, the helmet which he’d cinched onto this head, until the sun reflected from it. They had turned out in their best sagums, tunics made of light weight wool, originally dyed red, but though use in weather, it was at best a shade of light rose. The light clothing had been called for because of warm weather. The caligae, leather military boots with hobnail cleats, were standard issue at all temperatures. They’d been issued new boots for the occasion and they chafed where the new leather met his skin in places. Standing guard duty in new shoes started out tolerable but as the day wore on, they’d become miserable.
An auxilia velite attached to the Prefect’s maniple, Militiades had been born in Crete and joined the army in Gaul. His maniple arrived at the Judean capitol to serve the garrison under Prefect Valerius Gratus and stayed into the term of Prefect Pontius Pilate, a thickly built former equite with higher political aspirations. Service brought Roman citizenship and if he lived through his enlistment, there would be a retirement stipend and land in some far off corner of the Empire that he could farm, along with other soldiers. Their presence, even as farmers, who knew which end of the gladius was which, helped tame the unsettled ends of Pax Romana.
Militiades moved from the area of the partially enclosed temple courtyard where livestock was being  kept in preparation from sacrifice. The place smelled of blood, shit and roasting meat, which shouldn’t have made him hungry, but did. A boy, attached to his maniple as a water bearer brought by wineskin and gave him a few swallows. It had the taste of crude wine, watered down three-to-one for taste but no effect. His new post, near the money changers, had the shadow of a large awning cast over it.
An old man, bearded Jew, hook nose, prosperous clothing, hands gnarled like the branches of an olive tree, walked up next to him and spoke, “It is a good day, soldier.”
Militades growled a response but the old man’s cheerfulness could not be deterred. “Passover makes my year.”
“And your business is — Jew?”
“Simon, my name is Simon and I raise birds. For Passover I raise doves. The rest of year it’s hens, partridge and pigeon. That’s my place over there. My sons and grandsons are managing the business.” He pointed to a large stand with caged doves, sold to pilgrims to make the required sacrifices. “Doves for those who can’t afford a lamb. And there are many supplicants who can’t afford a lamb without blemish.”
“And Roman denarius are not good enough for your use?”
The old man pointed to the table where the Roman coins, denari and assarious, which bore the likeness of Caesar Agustus on one side, and usually a god or mythic beast on the other were in the process of being changed into shekels. “Your coins violate our law which forbids graven images. They must be exchanged for shekels, which have the images of plants on them. We can’t take denari. It’s in violation of God’s law, particularly here in the temple.”
“I notice that the exchange rate strongly favors the temple during the holiday,” Militades said dryly.
“There are many tens of thousands of people who come to the temple in this holy season and this is the source of my prosperity and that of my family.  The temple tax coins are the only ones that I’m able to accept under the torah.”
“And Rome gets its share of the profit.”
“Yes, of course. Judea is under Rome’s heel. You are here to insure that the exchange goes smoothly, are you not?”
“I am here merely to maintain Rome’s law, for the Glory of Rome. Your birds or your practices of taking advantage of pilgrims is none of my concern. They are his.” Militades shrugged his spear toward a fat priest overseeing the money being exchanged over wooden tables, scarred and pocked from thousands of coins that had been pushed back and forth along their surfaces. “I do not interfere in matters of priests or Jews unless they violate Roman policy.”
A man, perhaps a few years older than Militades, dressed after the manner of the Essenes, walked up to them and, ignoring the Roman said, “Simon, the dove merchant, desecrating my father’s house once again as is your practice.”

“Yeshua ben Joseph, I am surprised to see you here. If you wish to make a purchase, you can see my sons over there.” He pointed a knuckle at the stand with many hundreds of white caged doves. “Or are you simply threatening not to make more cages for my birds, carpenter?”

“Take them out of here now, or I will scatter them and let fly. You are making my father’s house a market. Do it, and do it swiftly, or I will put them to flight. Do you understand?”
Simon looked at Militades, who shrugged. “Not my concern old man, but take care, friend Essene, with your threats that you don’t interfere with Rome’s business or its glory.”

Yeshua ben Joseph, a strong man with rugged features, pushed past the fat priest, shoving him aside, causing him to lose his balance. He picked up the far edge of the table and flipped it, causing the coins to scatter. The abject shock on the faces of the money changers as thousands of coins went in all directions caused Militades to laugh, but all else in the temple court drew into silence.

Yeshua uncoiled a rope scourge and began to whip the lambs and their owners, driving them into awnings that collapsed. He smashed the cages owned by Simon the dove merchant as well as others in his trade, and true to his threat, they took to the air immediately.

“My money–in the air and on the ground! Do something!” Simon keened at Militades, still laughing. “Help me pick up my money.”

“Stop!” Militades shouted half-heartedly at the rampaging man, who called on the priests to repent and purify the temple, whipping, kicking coins and punishing.  He broke out into laughter at the sight of the priests, supplicants and merchants all scrambling for hundreds of thousands of coins scattered about in the blood of sacrifice and lamb shit. He laughed, and then spoke to Simon as the Essene who Simon had recognized as Yeshua ben Joseph as the Essene continued to drive people before him, over-ending more changing tables. “Entertainment, friend Jew, is essential to the Glory of Rome.”