Message to Barack and Friends 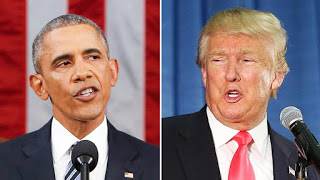 Facebook
Twitter
Pinterest
WhatsApp
The election of President Donald Trump is one for the record books. It’s the greatest political feat in American history, magnified by his opposition –  Hillary Clinton and the vaunted Clinton machine. She out spent President Trump by at least 10 to 1. And Donald Trump closed the deal on schedule and way under budget.

I’m out making the world safe for democracy. However I thought that I’d leave this summary for those few people who drift by the blog.


The election was a complete repudiation of Barack Obama: his fantasy world of political correctness, the politicization of the Justice Department and the I.R.S., an out-of-control E.P.A., his neutering of the military, his nonsupport of the police and his fixation on things like transgender bathrooms. Since he became president, his party has lost 63 House seats, 10 Senate seats and 14 governorships.

Preaching — and pandering — with a message of inclusion, the Democrats have instead become a party where incivility and bad manners are taken for granted, rudeness is routine, religion is mocked (except Islam) and there is absolutely no respect for a differing opinion. This did not go down well in the Midwest (fly-over country), where Trump flipped three blue states and 44 electoral votes.
Barack campaigned for Ms. Clinton (The Bitch of Benghazi) by saying that a vote for Donald Trump was a repudiation of both his presidency and his legacy. Sixty-two million Americans agreed with him when they sent President Trump to the White House. Meanwhile, the mainstream progressive media went into melt-down mode on election night. All the work that they did – the shilling for Clinton, the lies and vicious attacks against President Trump, the non-stop attacks – were all repudiated as Donald Trump was elected forty-fifth president of the United States.

Here is a short primer for the young protesters. If your preferred candidate loses, there is no need for mass hysteria, canceled midterms, safe spaces, crying rooms or group primal screams. You might understand this better if you had not received participation trophies, undeserved grades to protect your feelings or even if you had a proper understanding of civics. The Democrats are now crying that Hillary had more popular votes. That can be her participation trophy.

A few take-aways for the Democrat Party:

Here is a take away for the liberal media:
There were rumors that Barack would have been appointed to the US Supreme Court under a Clinton Administration and he’d be around to lecture the nation from that forum until he shuffled off this mortal coil. That is unlikely to happen now. Oh, he’ll still be featured on MSNBC for the progs that watch that channel, but he won’t do it from the bench.