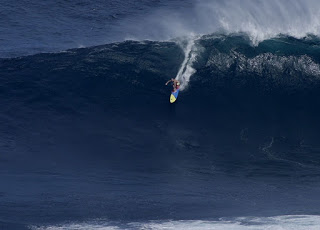 The Jaws surfing competition at Pe’ahi, Maui was called today because the waves were too big. After it exceeded a 50′ face all of the big wave surfers were getting hurt. It’s a long damned drop on a thin, maneuvering triple fin board. Even with a goofy foot in the crew, nobody split the curl in two directions. Those sorts of wave sets are not for the feint of heart.
Tomorrow it’s the Van’s competition at Sunset Beach, where the waves may get nearly as insane at the Maui waves.
So what do you do when the surfing competition is called for the day?