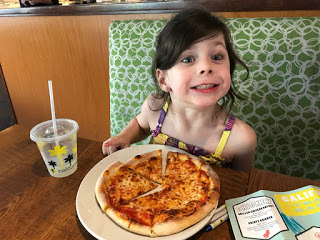 Facebook
Twitter
Pinterest
WhatsApp
As a father of four girls who are now women with families of their own, I have a job to do as a grandfather of eight. To spoil the grandkids as much as I spoiled their mothers. This is your Sunday Sermonette, and it has more to do with the sort of sunday that you eat than a religious service on the Day of Rest. Though some would say that eating one of the milk shakes pictured below borders on a religious experience.
First you start with a daughter/aunt and a granddaughter who has been entrusted into the care of both of you. In this case it is Emilie, and Savannah, age 4 1/2.
Then you drive to California Pizza Kitchen where the lucky granddaughter orders a delicious cheese pizza and lemonade for herself.
Emilie and I spit a peperoni and olive pizza with a salad.
Under some circumstances that would be enough but it wouldn’t qualify as “spoiling”. It would just be a meal that my granddaughter likes better than any other. It’s lunch.
Making the day memorable requires ice cream in significant quantities, in a really delicious delivery/display that makes it taste even better:
So we went to Mug Shakes, which makes a milk shake/sunday the right way: 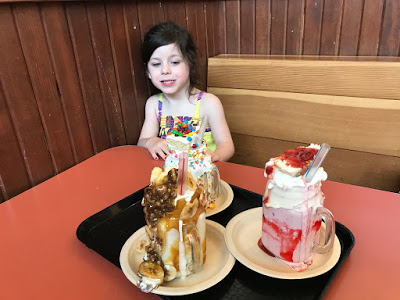 Since this is Savannah’s first encounter with this sort of milkshake, and because they’re almost as big as SHE is, she didn’t quite know what to do at first. But that’s why she was issued Aunt Emilie.
I asked Savannah if she had the perfect day. She explained that while the day was memorable, it would be better if we could go to the toy store. Naturally we went there and she picked out her favorite thing. 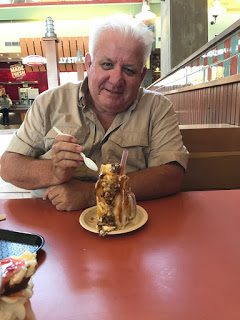 And Grandpa had to have a bite as well. In this case it’s a banana caramel/toffee shake.