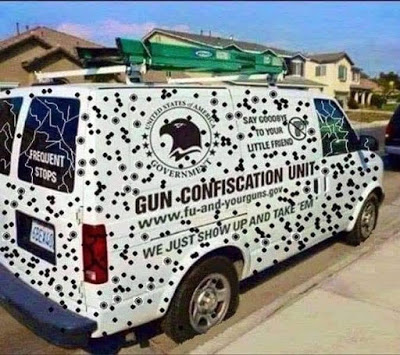 We owe a debt of gratitude for Beto laying out the Democrat agenda explicitly in the recent debate. The want to take our firearms by force. All of them. That’s the stated goal now and it will likely be a plank of the party going into the 2020 elections. “Say goodbye to your little friend.”
The red flag laws are merely a smoke screen and are an excuse to denounce people and have the police or whoever they can get to handle a dynamic entry.
Irish Bob won’t be leading from the front. He’ll be in a bunker, surrounded by walls and armed men.
At least it’s out in the open now. No more beating around the bush. I wonder if the Democrat elite are prepared for a civil war?
Mail:


Weekend Sermonette
LindaG – I knew about “Ms. Menopoly” – which makes me want to puke; but that Church edition has to be a joke.

Babylon Bee is every bit as real as CNN or MSNBC.

LSP – A Baptist pal tried to recruit me to sell Shacklee(sp?) products. I think the idea was that I’d sell the scheme to church ladies. “How much more money do you need?” was his pitch. “None. Live like a monk on Athos, old chap,” came the reply.

That threw him. To be fair, I don’t think he’s aware of Athos.

I’ve been to the Holy Mountain and plan to visit this autumn. I know how the monks live and they have sufficient for their needs. What more do you want?

tsquared – Wait for it, the will also be “Ms. Monopoly” call girl edition.

Worth Thinking About
Editorial Note: we received the most comments about the newly minted Space Force and of course the Space Marines on Mars. 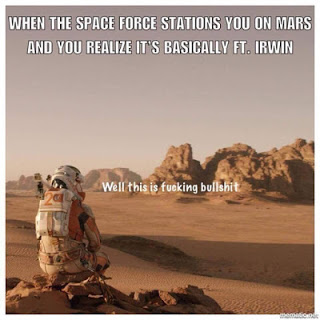 Beans – Well, being in a space suit is kinda like being in an authentic USArmy or USMC fart sack, so…
At least the Space Marines will be cooler temperature-wise than at 29 Palms, and farther away from all the Jabba the (future) Dependants located around most Marine bases… (I’ve read too much ‘Terminal Lance’ for my own good.)

If you’ve ever worn  a MOP suit while training, it will discourage you from signing up to be a genuine Space Cadet. It’s especially galling to have to inject atropine through the suit into your leg. It’s a wicked long needle and even though the training dose is some sort of lactate, they want to see if you have the rocks to jam a big, long, needle into your leg and trip the dosing lever (injector, atropine, training, one each in pouch with fastener, adjustable slide – also known as a ‘zipper’.) I was stupid enough to go along with the plan and it hurt like a SOB. So much for having more balls than brains

And you’re right, Beans. There are no sweat hogs by the main gate on Mars on pay day to try and spend your money and get pregnant. At least that’s something.