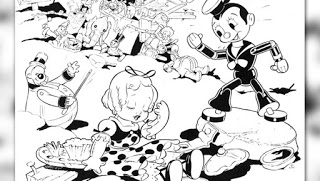 It is likely that the drone attack made against the Saudis by Iranian proxies (the Houthi militia) will be reciprocated this coming week. Maybe Kharg Island? Could the island capsize? Ask Rep. Hank Johnson (D-GA). I’m sure that the Saudi drones will be effective in eliminating the entire Iranian capacity to deliver oil to waiting ships. It’s what Iran has been asking for. And if you ask long and hard enough for something, maybe you’ll get it?
US hardware, US advice, and Saudi money. Additionally, the US has released the war reserves of oil into the market to stabilize the price of crude worldwide.  And the promise of higher prices will increase the drilling and the construction of refineries in the US.  Poke-a-haunt-us will be unhappy, but there will be a lot of global warming at specific points along the Iranian coastal region.

The new novel is coming along. No teasers. I’ll advise when it’s available. The President tasks the National Security Council to do something; the loyalty of key staff in place is in question; people come out of retirement based on recommendations; And what worked once to save the world may (or may not) work again.
The Mail – Sunday Notes and the Irish Bob Initiative:
Jim – Really liked that van. Leading from the front is something they just won’t do, after all there are no Theodore Roosevelts in that group. Of course they have armed guards. Their lives are far more important than ours.

Finally, you wrote something that your betters can get behind. Their lives are CLEARLY, MUCH MORE IMPORTANT THAN YOURS. Armed citizens to them are much like the sound overhead of native feet on the deck of the slave ship.

The joke is that “buying” firearms in an environment where there is at least one firearm for every three people in private’s hands has absolutely no impact on public safety. It has and always will be about confiscation. Once it is a crime to be armed, they will let the police go to work. I don’t think that’s how it will end up, but they play their games and we play ours.

WSF – The (P)regressives are now out in the open. They want to disarm us. Not that it makes any difference to closed minds, I try to use facts (comments on FB, local newspaper) that in a country of 316,000,000 we average >80,000 firearm deaths a year.
There is a program that works well, at very low cost, and has for years; Hunter Safety Courses. Should you be required to pass a safety course before owning a firearm? Makes sense, but the (P)regressives would jump on that and pervert it. Remember, Chuckie Schumer has made it his mission, starting as a Congressman, to insure the portion of the ATF budget for citizen appeals has never been funded.
We live in interesting times, damnit.

The agenda of the deep state is just a bit clearer than it has been before. And the Red Flag laws are nothing more than an excuse to target certain people who are a stone in their shoe. If the people target don’t have firearms, one can always be planted – likely stolen. If the FBI targeted the President of the United States with fraudulent charges, how hard will it be for them to do the same thing to YOU?

Beans – Remove suicides and accidents and the number of ‘gun deaths’ drops dramatically, and are caused more by one social/economic group than any other, and the victims are also usually of the same social/economic group.
Actual ‘normal’ people being slabbed by ‘gun violence’ is like… around 2-3K at the most.
We, in the US of A, really don’t have a ‘gun violence’ problem. We have a social/economic group violence problem, and a lot of people who choose to shoot themselves instead of jumping out of windows, or slitting their wrists, or taking an overdose of Tylenol (a really nasty way to die, taking over 8 Tylenol at a time…) or any other way of self-slabbing.
Try telling people that, that outside of suicide, we have an issue with a particular social/economic group, and their heads explode.
Wonder why?
Personally, I think marksmanship ought to be taught especially in the schools of that particular social/economic group, as the higher body count from actually hitting the intended targets would rapidly decrease that social/economic group faster than Planned Parenthood does (under the tender program instituted by that liberal fathead Margaret Sanger, of whom’s ideas the NAZIS and Hitler employed, after Woodrow Wilson and FDR used similar programs…)(Don’tcha just love history?)

If you take the inner city and suicides out of firearms related deaths, the results are statically insignificant. Of course, to do so is racist. It’s much easier to demonize a particular rifle or set of rifles than it is to deal with the problem.

LSP – Beto only said what we already knew. The only question is going to be how bad it will get if they do win. Praying they won’t.
Are the Dems trying to lose 2020? Sure seems that way, but they live in a bicoastal leftist bubble, so they’re blind.
“They have eyes but they cannot see,” well said, Bible.

The Donkeys have an absurd platform, and it’s interesting to see the pundits deny what their leaders are saying on national tv. Surrender firearms, backyard BBQ’s, meat and your car because if you don’t, we’re all dead in 10 years…and think about eating our dead. Which is roughly the same thing that they said 20 years ago at Y2K, but the millennials weren’t around to listen to them then.

Old NFO – If you wanted to ‘motivate’ the silent majority, you just did, Dems. But NOT in the way I think you wanted to…

I wonder if Beto is paid by firearms and ammo manufacturers. Obama was the greatest firearms salesman in history. Beto is reaching for the crown.

DRJIM – As Claire Wolfe once said: “If you think it’s time to bury your guns, it’s probably time to start digging them up”…or words to that effect…..
Just remember, Patriots, to buy your large PVC tubing using only cash, and in a Home Depot NOT near you…..

You should store them well oiled as well.

And with open borders, I’m sure that there will be an opportunity to buy an inexhaustible supply of military grade hardware as drug cartels shift their focus to weapons cartels.

Ed said – As I commented at Rec Paul’s:
The NFA pretty much took our rights away because nobody could afford Tommyguns and Monitors, etc.Short barreled rifles, etc. seemed small change.
But  today?
Too many Ar’s and Aks to get away with it again.
When they come around, will we be advised not to answer the door by the same politicians telling illegals not to answer the door?
I took that oath in 1972.
I just ordered 1000 .223, 1000 7.62 and 250 .357.
Let the festivities begin.

I don’t want to ‘hear the shot heard round the world’ fired again, but if it comes to that people will act out of necessity. Support and defend the Constitution against all enemies foreign and domestic and bear true faith.