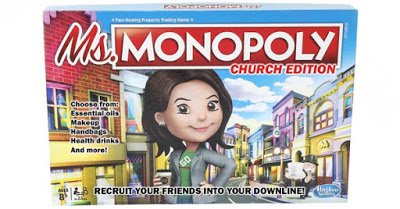 Facebook
Twitter
Pinterest
WhatsApp
Multi Level Marketing (MLM)
Yes, it’s a pet peeve of mine. I’ve had in-laws invite my family to “gatherings” in the past that turned out to be “AMWAY parties”. My wife tolerantly sat through them. I pinched one or other daughter just hard enough to make them cry so that I could make my exit to deal with a distressed child. Yeah, I’m that craven. In the end we grudgingly bought soap.

Church ladies seem particularly prone to these work-from-home businesses. They have a pre-organized base of mooches, who can be signed up to sell AMWAY, Thrive (diet patches), Avon, or any one of a number of great deals. The plan is not to have people buy what they sell, but to organize a sales force.
If you get in early on a pyramid scheme and you are inclined to sell territories or whatever to friends, you can make a lot of money. That’s how pyramid schemes operate. Some survive for many decades and others collapse within a few years.
Church people are particularly vulnerable as are family since both groups are unlikely to kick your wife’s (or your) ass for burdening them with your crap.

I recall the past, and FBI Special Agent Richard W. Miller selling AMWAY out of the trunk of his FBI car in an effort to make financial ends meet while he was having sexual congress with Svetlana Ogrodniikova (a KGB asset, who paid him to engage in espionage against the United States). Special Agent Miller sold AMWAY while working for the FBI and his wife, Paula, sold it to church people when not tending their eight children.

I was in the FBI office on Wilshire Blvd, Los Angeles circa early 80’s. Miller, who was overweight, waddled by eating a candy bar. I asked who that was. The Special Agent lowered his head in shame and said that was Miller, the local AMWAY rep, who was on the foreign counterintelligence squad.

I’m not saying that Miller (who served 13 years of a 20 year sentence at the Federal Prison at Marion, IL, for espionage) was a typical AMWAY sales person. He is one of the AMWAY folks (outside of annoying in-laws) that I can recall.

(Babylon Bee) PAWTUCKET, RI—Hasbro has unveiled a new version of Monopoly targeted at Christian women. The game, titled Ms. Monopoly: Church Edition, will task you with recruiting all the other players into a pyramid scheme.

You go around the board buying starter kits for various MLM organizations. If other players land on a starter kit you already own, they’re forced to go to a “party” and then pay into your business as they’re helplessly sucked into your downline. Collect a full set of same-colored MLMs, and you’ll have a monopoly as your church or neighborhood’s main supplier of overpriced oils, handbags, or plastic storage containers.

“We’re empowering women to collaborate with each other by exploiting one another in the spirit of fellowship,” said Greg Wesley, lead game designer. “This is a powerful feminist statement that shows women can go off and be their own bosses by making everyone at the top of the pyramid very rich.”

After a few times around the board, each player will have bought into several MLMs and also be forced to buy stuff from their friends’ MLMs, meaning the money in the game will constantly be drained out of the system until finally no one has any money left.

The game is sponsored by official brands like Plexus, Young Living, Mary Kay, and Avon. The game even includes a free coupon for a consultation with a local sales representative from one of these agencies, so you can experience Ms. Monopoly’s depiction of pyramid schemes in real life.

When you pass Go, you’ll also pay the bank $2,000 for all the products you’re forced to buy. By the end of the game, everyone will be broke and the real winner will be the men who launched the deceptive MLM businesses and suckered women into them in the first place.

LSP – Benghazi was beyond outrageous, that the BEAST walks free to this day compounds the crime.
I wouldn’t want it on my conscience but she doesn’t seem to have one. So.

Imagine if she was your president now. I do mention it from time to time on the blog because we owe a great debt to President Trump to weathering the storm of attacks for this nation. If we had Hillary, with a weaponized FBI and CIA looking at the US and patriots in the same way that Barack weaponized the IRS… We dodged a bullet, old friend.

And send the private my best.

Fredd said – I understand that the actual call to stand down was not originated by Hillary Clinton, only executed by ‘The Bitch of Benghazi.’ The recommendation to stand down was the idea of Valerie Jarrett, who figured that a few dead diplomats would be far better than videos of a U.S. counterattack that might sour the Arab Street’s view of America and the West (which has been sour since the days of the prophet).
Looks like Valerie Jarrett was wrong. But don’t tell the mainstream media that.

Barack was partying with Beyonce and JayZ in Las Vegas at the time and it is said that he was loaded on illegal narcotics – just one more felony. Thus Jarrett was the White House person involved. I frankly doubt that the Vice President Joe Biden would have stood the rescue mission down (F-16’s and AC-130 gunships). As you point out, Jarrett was the Muslim mole in the White House – more of a true believer than Barack who was primarily lazy. He wasn’t clever enough to be a Manchurian Candidate.

Jim – As I stated the other day, this still angers me. “Stand down” is not an option here. If Army or Marine units can’t arrive in time, send them anyway. Payback can always get exacted. If there’s no ordnance on the F/A-18s, send them anyway. A low flyover would likely at least slow them down. I understand both options were scotched. Unforgivable.

There were F-16’s (ready alert), armed for an air-to-air mission at Aviano Air Force Base, Italy. They have cannons and could keep the rag heads at bay until the AC-130’s (which are armed on the pad) arrived. As you say, load up the AFRICOM forces on rotors and arrange for refueling and get them there. I don’t know how long it would have taken to arm other F-16’s with bombs, and get the B-52’s rolling from wherever they were. Typically there are also ready alert B-52 and a boomer (refueling tanker) crew also on the pad, ready to go.  The Mohammedans are lucky that I wasn’t the president. There would be precious little of Benghazi left. It would look like that highway out of Kuwait that was bombed continuously as the Iraqis retreated, or the Bahamas after the hurricane pounded it flat. Sometimes you need to send a message.

WSF – An unwelcome message for those at the tip of the spear. “When the shit hits the fan, you’re fucked”.

I’ve been one of those.

Yes, I think that President Trump would have approached the problem differently. First off, he’s not loaded on illegal narcotics and doesn’t drink.  Secondly, I think that his response would be more like the LL scenario (Above, see “Jim”)

Kle – In fairness, the Forever War has always been forever. AFAICT from my research, the longest period of peace in US history was 8 years during the Great Depression, when we and everybody else were just too damn broke to fight for anything less than survival.
There’s this old saw about the US being a peaceful nation, but it’s a bunch of hooey.
As for politicians sons and Hollywood celebrities going off to war, it would be nice if politicians took rolling the dice a little more seriously. However, I certainly don’t want to go back to the way we used to fight – badly, with conscripts used as ammo – so that we could lose more men than ten years in Iraq and Afghanistan has cost us to date, in an hour at Savo, or six months over Germany in the 8th Air Force.

RHT447 – Ah yes, the checkout line follies. Back during our Kalifornia days (daze) I got some entertaining responses when paying cash and remarking to the clerk “Here, have an original first edition “food stamp”. Also just got deer in the headlights.
Our daughter is in six years as a patrol officer. We live in her district. Her husband is SWAT in the next town over.
Benghazi. Stand down = everybody dead = no witnesses. Words failed me then. They still do. I’ll go with what LSP said.

I’m glad to be out of the People’s Republic of California. It seems to be circling the drain.

Raven – There are people who, despite being non-current military, should be awarded national recognition for valor. Certainly Woods and Doherty are among them, no doubt the CIA has done so in a private way. Also people like Beamer and Co., who interdicted the scum on Flight 93- there are some Americans who with no training, no assigned “duty”, just do what has to be done, putting themselves at fully known grave peril to save others.

The CIA is a non-uniformed military service. CIA ranks correspond to US Army ranks.  Woods and Doherty were contractors, not CIA officers, but all the same, Woods and Doherty have stars on the Wall in the foyer of the headquarters building. The Flight 93 memorial recounts heroism in the face of horror. A lot of valor goes un-rewarded and un-recognized. It’s only known to the people who were there. Maybe that’s enough, but I’m with you. I like to see their survivors get a gong to put on the mantle in recognition or something. And though those left behind have a cherished memory of their incredibly brave kinsman, they’d rather have them alive than have the award.

Beans comments – That’s one of the purposes of the Presidential Medal of Freedom, a civilian version of the CMOH, until Barky the Magic Moonbat gave them out like crackerjack prizes, the bastard!

Barack, the magic inner city person, did hand them out like a hooker hands out clap to the apparatchiki, but he also sold them. If you wanted a Medal of Freedom, a discrete honorarium in the right place put you on the stand with the anointed one. Slide Joe Trippi, said to be an Obama bag man, $100K, and he’d pass $75K on to the Barack Obama Charitable Trust. A suitable legend would be concocted for the citation (where you gave Qur’ans and soap to inner city children) and you’d get a very nice gong. I never discussed this with Trippi personally but I know people who said that they did. You’d need to kick in substantially more if you ALSO wanted to spend a night in the Lincoln Bedroom, the Obama B&B.