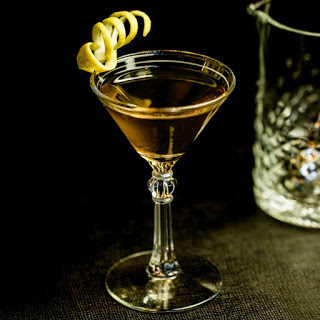 Facebook
Twitter
Pinterest
WhatsApp
An e-mail from CH (by way of advice)
As you know, for years now I have worked long and hard to find the formula for the perfect martini. Goodness only knows what the ultimate result of my research will be. Omnipotence? Eternal youth? Whatever comes will be a major step in the Ascent of Man.

I have found a new and tasty gin. It is Opihr, a London dry gin with a slight Oriental flavor. It is not cheap but it certainly beats all the other Oriental gins like Rangpur. Even so, I still believe Old Raj to be the best gin. It is awfully expensive (over $70 a bottle), extremely potent (110 proof) and wonderfully–even dangerously–smooth and flavorful.
Cork gin is also a super gin, but it is virtually impossible to obtain.
Well, of course, the bottom line is “each to his own.” De gustibus non est disputandum
I have always felt that music must be playing in the background while shaking the perfect martini. Music, as with so many things, is just a matter of preference, it can be used to move a person in one direction of another. And sometimes, it just reflects the person.
For example, two highly accomplished CIA officers that I know, Jack Downing and Alex Goodale, prefer the easy jazz of Acker Bilk, while another CIA officer (who was markedly unsuccessful, so I will not give you my name) prefers soaring Wagnerian music, such as ” Das Rhinegold – Entry of the Valkyries into Vallhala” or the more popular “Ride of the Valkyries – This is a Romeo Foxtrot, shall we dance”. Another fellow I know just likes comforting Southern porch music, such as “Tara’s Theme“.
Note: CH, a Southerner who loved all things Southern, also listened to rebel music while he mixed his martinis. I heard him…and am ratting him out now that he’s in the great beyond. In the end, though he died at Walter Reid Military Hospital (in the North) he was buried in Southern Ground in Arlington National Cemetery. RIP.

Better than the Zoo

Born in Arkansas in 1940, and raised there through the early 1950’s, I never saw an Asian person. When I entered the University of Maryland in 1957, word came through the grapevine that an ethnic Chinese girl by the name of Trudi J. wanted a date with me. I learned that Trudi had just pledged Kappa Alpha Theta sorority and that others considered her quite beautiful, but I declined to contact her.

The next week, I was again told to give Trudi a call. “She thinks you are good looking. She was Miss Chinatown last year and her family is quite rich.” Still, I declined the offer, explaining that I just wouldn’t feel comfortable around an Asian, what with their single-fold eyelids. Who would have guessed that only a few years later, I would learn the Chinese language and marry an ethnic Chinese girl who had just entered the CIA’s Career Trainee Program. Now, after 42 years of marriage, I don’t think of my wife as Chinese. She doesn’t speak Chinese, and I only think of her as “Boss”.

And my experience with Trudi J. has something of a parallel with Chinese concern for Caucasians. A comment frequently heard in the United States is that “all Chinese look alike.” It proceeds, of course, from most Americans’ unfamiliarity with Chinese features–and the same is true about Chinese who say the same thing about Westerners.
Standing in Beijing’s Tiananmen Square one freezing morning in November 1978, I learned just how unusual we Westerners appear to Chinese. Sensing someone looking at me, I glanced to my left and saw at arm’s length a strikingly handsome Chinese girl staring at me with an unblinking expression of wonderment on her face. She was fully six feet tall, with the broad and flat face common among Chinese from the northeast provinces, and dressed in heavily padded peasant clothes and a huge fur hat.
Speaking in Mandarin, I asked her if I was the first foreigner she had ever seen. Not at all to my surprise, she said I was. In continuing conversation she explained that she had come to Beijing from Heilongjiang Province, for the first time, as a tourist. Her friends had advised her, she said, to go to the Beijing zoo, but she added–with the wonderful candor of a country girl– “I’ll just stay here. You foreigners are more queer-looking than anything I could see at the zoo.”