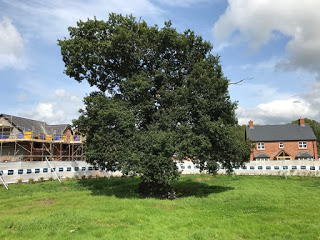 Facebook
Twitter
Pinterest
WhatsApp
Back Story: While on walk-about an interesting part-time consulting job popped up. It’s a collaborative effort between USGOV and HMGOV that is being played out at Aberdeen Proving Ground (just up HWY 95 from Baltimore, MD) in the US and at RAF Spadedam, a base just east of Carlisle, England. Would I be interested in participating? Maybe. Depends. Convince me.
This led to a “house hunting” trip within striking distance of RAF Spadedam. “What sort of area do you fancy?” Naturally I like historic towns, small medieval places that provide an opportunity for some research and exploration. “There is new residential construction going on in Clifton, just south of Penrith and you could commute on the train to Carlisle or just drive (it’s not that far). The new homes are spacious and have two-car garages.”
We arrived at the homes, at Clifton, which were quite nice. Some were complete, some still under construction. Next to the homes was a large tree, fenced off. “That’s the Rebel Tree, where the last battle between the Scots and English took place on English soil (the Battle of Culloden took place four months later in the Highlands).”
“Fly fishing on the Eden is popular for young salmon and sea trout (steelhead).”
“The women of Penrith are known for their beauty and their sensual nature.” Don’t press it. “Too much?” Yes, a bit. 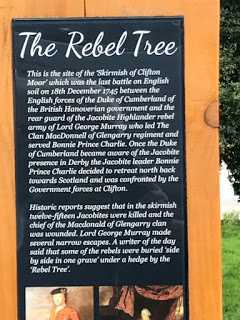 “The chippy in downtown Penrith won the award for the best fish and chips in Great Britain in 2014.”
Is this an offer of an extended vacation in the English Lake District (Keswick is a few miles farther inland on the Eden) or will there be work involved?
So I’m at this tree that is having homes built up around it. The English don’t think that the 600 year old oak with the Jacobites buried under it is all that important, but the builder was compelled to put up a sign (left).
Historical Context: The Romans expanded throughout Britain by building roads. Where the road met a river it needed to be bridged. If there was a bridge, which caused a choke point in their lines of supply, communication and reinforcement, there needed to be a fortification to hold the bridge. The River Eden provided one of those situations and the Roman Road, fort and bridge led to the creation of Penrith. Clifton Moor is just south of Penrith astride the Roman Road.
Vikings settled the Penrith area during their time of occupation in the 600-900 AD timeframe but not much is left of their time in charge except the genetic material that they contributed to the population. In 1412 (+/-) The English build a castle tower at Penrith.
fast forward
In December of 1745, the Scots under Bonnie Prince Charlie (Charles I) were retreating from Derby and his Jacobite Army was crossing the Eden by the old Roman Bridge. Sensing an opportunity, on December 18 The Duke of Cumberland, commanding the English forces, moved up to cut the Scots off. The Battle of Clifton Moor was a skirmish between his advance forces and the Scottish rear guard, commanded by the Chief of the MacDonald of Glengarry Clan. The Scots were defeated at the Battle of Culloden, four months later on April 16, 1746 in Scotland and that ended the Jacobite rising. 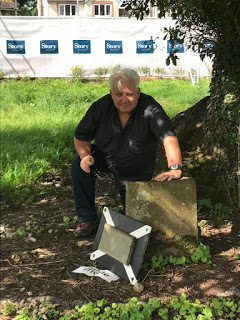 The skirmish between advance and rear guards proved inconclusive. About a dozen men on each side were killed by musketry. The English Army retained control of the ground and buried the Scots near the Rebel Tree in a mass grave. They buried their own soldiers in ‘hallowed ground’ at the church in Penrith.

Present Day: The photo is of me finding an old plaque to the fallen Jacobites, just laying face down under the tree. (depressing really)

What am I going to do about the opportunity? I’ll mull it over. I have a lot going on with the White Wolf Mine project in Arizona and a number of other different work gigs. I may become involved at a much less engaged way than friends of mine suggested would be optimal to them.

It might get me back to the Rebel Tree to see how it all looks once the houses are built around it. Will it be a children’s playground? I can’t say.