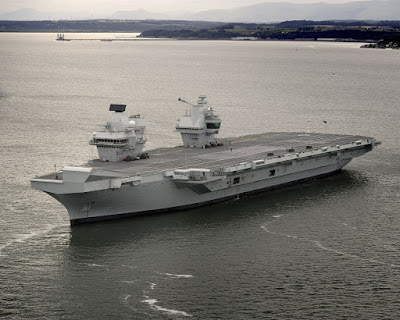 Facebook
Twitter
Pinterest
WhatsApp
Our British cousins are inordinately proud of their new aircraft carrier, HMS Queen Elizabeth and the HMS Prince of Wales (under construction).

It’s been a big cost to them and a big risk, because a lot of the brain trust that operated aircraft carriers at sea – is gone and retired. Aircraft carriers require a significant number of trained people to make them work. If the crew is not ready for prime time,  the ships don’t work. If you don’t believe me, ask the Russians or the Chinese. To the credit of the Brits, they get it and the ship won’t be operational until 2021 or 2022 even though it’s essentially complete now.
Prince of Wales should be operational two or three years later.
The UK linked its 65,000 ton carriers to the US-made F-35B (STOL) fighter, which will make up the fixed-wing portion of its air wing.

The UK will buy a grand total of 17 F-35B fighter jets between 2020 and 2022 – and acquiring the A model of the supersonic stealth fighter hasn’t been ruled out.

The American government announced on Wednesday the awarding of F-35 production lots 12, 13 and 14 to Lockheed Martin.

Between January and December 2020 the Royal Navy will receive three F-35Bs, with this number rising to six more being handed over in 2021 and eight in 2022. The approval doc added that these could be “other such quantities or variants as may be authorised by the Ministry of Defence.”

There has been some discussion as to whether the Queen Elizabeth will carry 14 or 16 F-35’s, but pessimists suggest that the number will be closer to 12. They will be flown by a MIXTURE of RAF and Royal Navy aviators because the Royal Navy is short of qualified jet pilots.
I received a personal tour of the Queen Elizabeth last week but had to sign my life away to the Official Secrets Act, so won’t be commenting beyond what’s in print. Basic fitting out will take place in home waters and more advanced sea trials will take place off the US Coast in order to better take advantage of US skill sets to work with their British counterparts.

All indications are that the two new aircraft carriers will be capable even with their small air wings. I can’t comment on future intentions the British may have to use advanced unmanned aircraft.