Ancient Persians considered the vernal equinox and a new growing season to be the start of the new year. Historically, it is a secular celebration, but various sub-denominations of Shia Islam consider it a day of religious observance. The ethnic Hazaras of Afghanistan, most of whom are Shia, honor it, as do the Alawites of Syria. Nowruz is the Iranian New Year.

I don’t have a lot of Iranian friends. Most Iranians I grew close to over my lifetime were agents of influence, penetration agents, and so forth. Recruited assets, who were generally expendable. I realize that seems a bit cold and calculating but it’s a wicked game. For those Iranians who may drift past this blog, Happy Nowruz. Go and enjoy a BLT in celebration and appreciate what you’ve been missing. (Add chicken and avocado if it makes you feel better about the bacon)

When are the McCain’s going to go away? Daddy (Songbird) McCain, who earned a living out of having been a prisoner of war, was a mean spirited RINO, who, despite his service in the gentleman’s club (US Senate), always put himself ahead of his nation…even in Vietnam, in prison. And he has whining children who are trying to defend their nasty father, who as it went, left this life as a species of deep state actor and traitor, motivated by ego and his nasty disposition.

As a resident of Arizona for a few past months, I have yet to hear anyone from here say anything nice about the late senator McCain, or former Sen. Jeff Flake, also a treacherous senator, now run from office, living on his $200K per year pension in a mansion in his rural hometown. I wonder how he amassed enough money to buy a mansion? I’m sure that he was a frugal saver.

Flake, who couldn’t get enough votes to be elected dog catcher in Snowflake, AZ, must be thinking of moving on to some other location where people don’t recognize him. Plastic surgery is an option but not in a place like Snowflake, where they’d still know him.

I wear Muck brand boots. (Men’s Arctic Ice Tall) They’re exceptional for working in mud, snow and water when it’s a bit cold. They don’t slip on the ice. They go to the top of your calf and they seal against moisture weeping in from outside. Five stars to Muck. Mine are insulated, though that has nothing to do with what happened yesterday. I had work to do outside and I keep the Muck boots in the garage because they get covered in…mud, and so forth, ‘muck’. And the garage is often open while I’m down in the canyon, working at the mine.
So I shoved my right foot into the boot – went right in. And the left foot into the left boot and – something warm, living and squirming. It was a mouse. A dead mouse by the time it left my boot. No, it didn’t bite me through my heavy wool socks, and I rinsed the boot with Clorox, and then Betadine. Same with my foot and socks.
All I can add is that the bobcats in the neighborhood are not doing their job very well. And Muck boots make a fine mouse trap under the right conditions.

No, there are no house cats to manage rodents. They’d likely live a day or two out and about, what with the eagles, coyotes, wolves, mountain lions and bobcats that roam wild in the national forest neighborhood where I live. Running up a tree won’t save them from bobcats or lions. 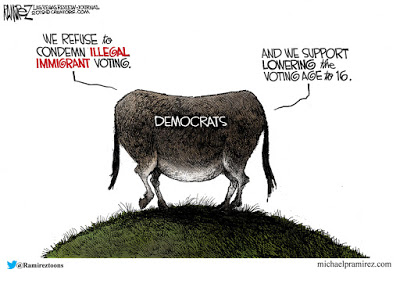 The big donors have told seventy-six year old establishment Democrat Slow Joe Biden that he isn’t ready for prime time and they’re not going to throw money at him. Imagine how that must sting the former vice president – that he’s somewhere south of Bob (Beta Male) O’Rorque in the political pecking order. Sitting in the #2 chair next to Barack didn’t seem to earn him much respect, even though the first half-black president did send him around cutting ribbons on bridges and attending irrelevant meetings on the rubber chicken circuit because he was a lightning rod of gaffs and misstatements.

It may be kinder for Joe if he just sits at the home eating checkers and thinking that they’re Oreos. If he runs, he’ll be forced to accept the end of cars, airplanes, and cows (milk, butter, cheese, steaks and burgers). I do know people who are close to Joe Biden. He was at their home for dinner earlier in the week. The Green New Deal doesn’t appeal to him, and he cringes at killing living babies (and selling their bodies for fun and profit to various companies).

Maybe Slow Joe’s era has passed and he’ll never get to take Donald Trump out behind the wood shed to see who’s the better boxer. I’d put my money on The Donald… at two-to-one if anybody wants to lay down a wager. Between President Trump’s comb over and Biden’s plugs, you know their hair will get messed up if nothing else.