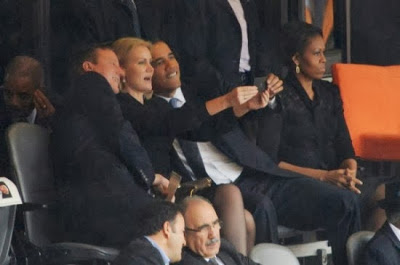 
It passes for mourning…
The First Family is headed to Hawaii for a two week vacation after the conclusion of Nelson Mandela’s funeral (which is sort of a vacation for Barack Obama since he is in his [alleged] homeland). The sour- faced First Lady doesn’t seem to be enjoying Africa as much as her husband, the Leader of the Free World, is.
Before he took off for his African vacation/state funeral, where he is partying on with the Danish delegation and PM Cameron (UK), he’s said to have given a speech at the US Naval Academy (as recorded by the Duffle Blog).

IF YOU LIKE YOUR JOB, YOU CAN KEEP YOUR JOB. PERIOD.

(duffle blog) ANNAPOLIS — In a speech at the United States Naval Academy, President Obama pledged to the assembled naval and Marine cadets that despite serious drawdowns, no service member would be forced to leave his or her job if they like it.

After acknowledging the Naval Academy’s hallowed history of producing the finest Naval and Marine officers in the world, the President first addressed assertions leveled by critics that the budget cuts will have a negative impact on readiness and morale. Some are claiming that the cuts are political, intended to fund the President’s pet projects.
“Programs such as Head Start, the EPA, the Veterans’ Administration, and Solyndra are vital elements of America. They service our citizens and veterans every day, and they need funding,” Obama said. “Let me be clear: we must get that money from somewhere, and some rich folks, rather than have some skin in the game, have sneakily gone bankrupt rather than work harder to pay more taxes.”

The Pentagon will likely be affected by cuts to the budgets of equipment, research, and personnel. The President addressed the direct impact on the reductions, particularly the issue of whether service members will be involuntarily separated from the service. He mentioned the Affordable Care Act, also known as Obamacare, and assured his audience that the Defense budget reductions will be carried out with as much discernment and efficiency as the ACA rollout.

“As I’ve always said, my signature achievement during my time in office, after earning the Nobel Peace Prize for my work in delivering massive peace strikes to Yemen and Pakistan, is the Affordable Care Act. Let me be clear: just as I kept my promise to all Americans that under the Affordable Care Act, nobody will see their payments increase, have to change doctors, or lose their health coverage, I will also keep this promise to you.”
The President then made a series of firm, concrete promises, underlined by the repetition of “period” after each one.

“If you like your job, you can keep it. Period. You will get to keep training to do the good work you do. Period. Nobody will have to leave military service if they don’t want to. Period. And let me be clear: if the ideologues in the GOP want to try to shut the government down again to prevent me from keeping that promise, unfortunately I will be powerless to stop them. I am only one man.”

The President’s speech was broadcast on all major networks and aired in time-delay on Armed Forces Network television and radio stations. 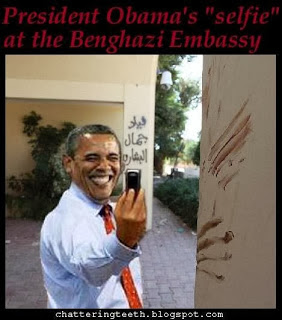