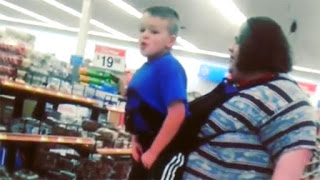 Wandering through Walmart, and to a lesser extent through life, I see hideous women with children and wonder to myself, “Who mated with her? Has he no shame?“
Thus begins my Sunday Sermonette and my confession here on the blog that I have uncharitable thoughts toward people sometimes.
My granddaughters liked the happy meals at McDonalds and I used to buy those (rip-off) fast food meals for them. The people who work at McDonalds — and I’m not speaking for all McDonalds — are so dumb that it’s a wonder that they are able to dress themselves and make it in to work. They Peter Principled themselves to their limits by taking drive-through orders, advancing as far in life as they are likely to go. The fact that I am buying food there shames me and makes me feel just as stupid – and a little dirty.

Hollywood progs receive a lot of uncharitable thoughts from me. In some cases they are talented artists who lack the common sense that God gave a snail. I should be more compassionate toward them — but I’m not. If I was an Islamic, lesbian, bisexual, gay, transgender, asexual, gender neutral, questioning, non-binary, gender fluid person of color, I might see things differently. But since I’m not – I don’t.

Driving in Southern California is a challenge because of traffic, and while I avoid Little Saigon usually, there are times when I end up transiting through the Garden Grove/Westminster corridor. All of the stereotypes that paint Vietnamese as bad drivers are accurate. “Hey mister Ling Wong – why can’t you drive like you play ping-pong?” I’ve heard that old people in Florida (mostly from New York originally) drive worse. I can’t say that its not possible.

I don’t like George Soros. Every time I see his picture appear on the news or somewhere else, I think of this iconic clip of his acting debut. I’m not fond of Nazis – no matter how progressive that they tell everyone that they are. Thus the same uncharitable thoughts that I have for Barack, I share for Soros. (and yes, Soros, spelled backwards, is still Soros)

The Federal bureaucracy hires people, who for want of a more appropriate term, fill diversity quotas. My favorite example comes from a situation where I needed photo copies. There were other public copy machines in the building – all had been sabotaged. The employees were happy to make me a copy on their machine at $5 per page. I flashed credentials and made a complaint with more senior people who explained to me, candidly, that both of the diverse people who worked there were managers who could not be fired because of their diverse nature. They had been transferred to the records area in order to limit the amount of damage they were capable of doing.

Feel free to share/add your uncharitable thoughts below –  and unburden your soul because it is Sunday.