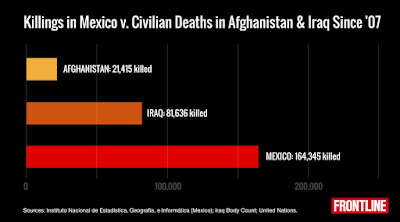 When I report on the murder rate in Tijuana exceeding 700 (reported) in 2016, and the murder rate in Juarez at 528, you need to balance that against 768 murders in Chicago during the same period From January-December 2016. America (land of the free, home of the brave) needs to keep all this in perspective.
There are differences between the Mexican Border and the City of Chicago, but it’s mostly in semantics.
Huge profits and little value placed on human life leads to trouble no matter where you are.
Let’s outline how the drug business works. Each significant city along the US-Mexican Border has a “Plaza”. The Plaza is an interactive hub where narcotics move north and currency moves south.  Each cartel wants dominance in each city because control of the Plaza  means control of the action.
One possible scenario
Let’s say that you were interested in going into the drug business and that you lived in Guadalajara, Jalisco. You run a non-narco business but it’s just not turning the sort of profit that you would like to see and you have a couple million dollars (in pesos) in the local bank. Maybe you inherited? There is nothing stopping you from becoming an entrepreneur and becoming a trafficker. The cartels won’t stop you (because they will demand a tax – part of your profit).

For the sake of brevity on this blog, you have a friend who lives in Colombia with access to cocaine and you have another friend who works for a Mexican television network. You know through your friend that TV semi-tractor trailers (usually 5 or 6) are driving from Mexico to Colombia with equipment to film an important football/soccer match. After the big game, they will return. You pay all concerned: The contact in Colombia and the friend who works at the TV station. You know that TV trucks are not stopped by customs between Colombia and Mexico so you’re comfortable that the dope won’t go missing.

You pay your Colombian for the narcotics product – let’s say that it’s 1,000 kg (one metric ton). The friend from the network pays drivers and grips to look the other way and in due time, 1,000 kg of cocaine arrives in Guadalajara where you stash it.
Word leaks out that you have 1,000 kg of cocaine hidden locally and want to sell it in the USA. The Guadalajara Plaza staff from Cártel de Jalisco Nueva Generación (CJNG) meets with you and says that’s fine but you need to pay the tax since drugs are flowing through their turf.  In exchange for the payment, they will keep the police (who are on their payroll) off your back and will allow the shipment to go through.

CJNG has considerable overhead to protect the drug trade in Guadalajara and you, the trafficker, need to pay for that. There is also the issue of who the boss is. In this case, El Mencho loses face if people run drugs through his area without paying for the privilege.

At this point, you have several options. You have made a sizable investment in cocaine ($1,500 per kilo for a total investment of $1.5 million) and another couple hundred thousand dollars to secure shipment to Guadalajara. However, now your cocaine is worth $13,000 per kilo, and so long as it’s not stolen by other narcos (or the police, which is sort of the same thing), you are sitting on $13 million in value.
Comparative value by location:
1 kilogram of cocaine
By moving your kilogram of cocaine across the US/Mexican border, you move its value from $13K per kilogram to $60K. You’re now faced with a problem, having paid the tax to the Guadalajara Plaza/CJNG. Your investment needs to be smuggled into the US. You’re not a cartel member, you’re an independent – and it’s allowed in Mexico so long as you pay the tax. Naturally it would be safer for you if you were affiliated with a “roof” to keep the rain off, but we’re offering a different scenario, one that’s not often considered.
If you want to make sure that your ton of cocaine arrives at the Port of Long Beach, San Antonio, or Bayonne, New Jersey, you can get a hold of one of a few cartel members and they will sell you load insurance. Normally it’s 10% by weight, so you’re going to give up 100 kg of cocaine with a US street value of $600,000 to get it through US Border security. They take the product (10% of total) not cash, and deliver your 900 kg of cocaine across the border.
Congratulations. You’ve turned a roughly $2.5 million investment (including transportation charges) into $54 million in value. All you need to do is to distribute it (which has overhead involved) and bring the money back across the border to Mexico (which has overhead involved) and you’re home free!
However, without a distribution network and the capacity to move money back home, you’re likely to sell the load short, for say, $50 million, payable in Guadalajara.
I’ve seen this happen, and it’s not uncommon. There are pitfalls between the point of sale in Colombia and the arrival of a ton of cocaine in New Jersey, and you could lose that $2.5 million you invested. THAT is why heroin is so much better for narcos than cocaine. There are no precursor chemicals to worry about, no lab to blow up (as with meth) and you haven’t invested $2.5 million that you could lose. Your overhead consists of subsistence level farmers who grow and tap the poppies for sap, a few chemicals and transportation. Instead of risking $2.5 million to make $50 million, you can risk less than $20K to make $140K per kg (US street price). A ton of heroin is the same weight as a ton of cocaine and it’s worth 4x as much on the street.
That’s the situation.