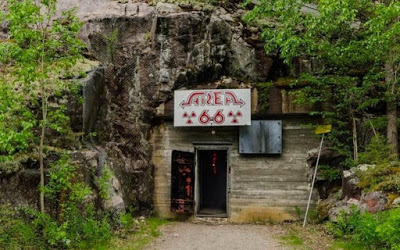 (Telegraph UK) I don’t know that I want to live in Sweden, but if I did, this would be a property that would end up high on my list based on the ads. It’s located in Boden (Northern Sweden) and the asking price is about $250K. Reasonable.
I admit that I’d need a decorator to go through and spruce the place up, but it wouldn’t cost me more than a couple hundred K to do that…maybe a garage on the outside to park the toys and it’s even better than the White Wolf Mine.
What are the Brits Thinking? 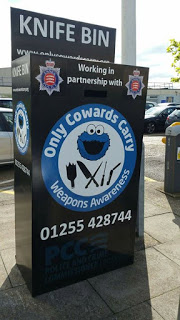 The photo speaks for itself, but who in their right mind would surrender weapons in the face of Muslims who want you dead?
“Only cowards carry?” Really? So they really think that it’s smart to bring hands and feet to a gun fight or a knife fight? If I had a gun shop, the sign would say “only idiots disarm themselves in the face of those who would do them harm”.  The knife bin (left) should be a bin where you can pick up a good knife to keep handy. I realize that I approach this situation the way an American does.
There are remedies to the rules because there always are:
Axes are legal to carry in England, likewise tomahawks. They’re also legal in Russia. You can’t carry a truncheon (stick) lawfully, but put a  razor sharp steel blade on it and you’re golden.
A bar of soap in a sock is also legal in England. You’d think that they’d have tried to ban them but no. It may be fall out from having been trained by HM GOV to use a bar of soap and a sock to kill people back in my callow youth? They’re keeping the option open just for me and people like me.
Likewise computer circuitboard is not illegal to carry, but there are things that you can do with that which would make even Prince Phillip blush. There are also automobile parts that one can carry, which avoid the tools (such as screw drivers) mentioned by statues. And you never know when you need to fix a car.
Piano wire? Yes, legal in the UK. Likewise syringes (push-to-use) are only illegal if used to dispense illegal narcotics. Drain cleaner is not a narcotic. Which leads me back to the whole premise of the law. Firstly, no criminal will disarm. It’s not what they do. Secondly, no trained person need “disarm” because you can pack a whole arsenal around with you in the UK lawfully – if you think out-of-the-box.
They need to re-think things. Allow the citizens parity with the Muslims and thugs – and Muslim thugs. Change the knife bin to a knife dispensary. 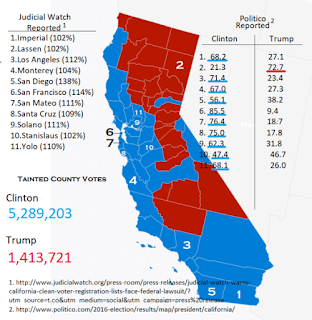 File this one under: Nobody is shocked

In June California Secretary of State Alex Padilla told the Trump administration the state will not cooperate with the election integrity commission because it would “only serve to legitimize the false and already debunked claims of massive voter fraud.”

Friends from outside of the US continually comment on the problem of US voter fraud. They state correctly that it’s easily fixed by government issued voting cards – the way that they do it in Mexico. It’s government and voting integrity, designed to root out corruption.
I usually just laugh and explain that our present system is rooted in the faith that corruption will carry the day. It’s how one party maintains power, and the other party is too weak and stupid to call them on it every day.
The corrupt, elite, sly, smug, nasty, lying mainstream media keeps the myth of government integrity going, because it serves their wicked purpose.