Solidarity against the Turks 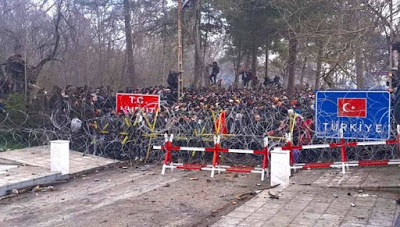 Facebook
Twitter
Pinterest
WhatsApp
Greece’s Kathimerini newspaper reported on Tuesday that authorities in Poland and Austria have reached an agreement with their Greek counterparts to send a significant number of policemen to assist in the guarding of the border at Evros.

The report suggests that Poland has made the decision to send more than a hundred men from its police force’s special units — and is ready to send many more if Athens requests it.

Quoted by Turkey’s Daily Sabah newspaper, Erdogan said that ”Mitsotakis needs to look at the universal declaration of human rights. They (the Greeks) need to know and accept that their treatment at the border is murderous. We will expose again the pictures of refugees stripped of their clothes this year at the UN General Assembly.”

The moves by Austria and Poland are helpful but they are also symbolic, and sometimes the symbolism and statements of international support are very useful in the game of brinksmanship that the Turks are playing, using turks who would immigrate/invade Greece as pawns in a larger move.

I have no idea whether or not the Greeks will take up the suggestion to form a battalion of Ghurkas to augment their border troops. The Chinese Plague hit in the midst of negotiations. We’ll have to wait for the dust to settle. Greece is locked down just as hard as Italy is as they hope to avoid the “Italian Scenario”.

Some have suggested as a humanitarian move that they distribute blankets (sneezed on) to the Turkish refugees. It’s a move with its roots in history.