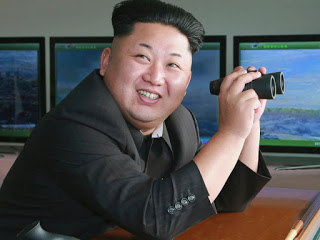 The imagery analysts at 38 North published an imagery analysis update entitled, “North Korea’s Punggye-ri Nuclear Test Site: Primed and Ready.” The images are copyrighted and I’d prefer that you look at their website than to copy their photos here.
In a nutshell: 38 North reported that satellite imagery detected vehicles and people at the North Portal, in the main administrative area and around the command center. They judged that the water flow being pumped from the North Portal has decreased and the spoil pile remains unchanged.
The site remains active and physical preparations at the north tunnel appear to be completed. Digging in the tunnel has stopped and it seems to be less damp.
People are detected in the administrative and command center buildings when there is work to be done at the site, meaning a test. Kim Il-sung’s birthday on 15 April is the next major celebration for which a nuclear test would be appropriate.
Kim Jong Un and his advisers remain defiant. All indications are that they’ll test a nuclear weapon soon.
A single source report from Hong Kong states that China is preparing forces to move to the Korean border in northeastern China.
The Information Center for Human Rights and Democracy, a nongovernmental organization (NGO) in Hong Kong, said Beijing has ordered troops in all five military regions to maintain preparedness because of the situation in North Korea, according to Oriental Daily News in Hong Kong.

According to the NGO, China’s armored and mechanized infantry brigades in the provinces of Shandong, Zhejiang and Yunnan received the order.
This information is not confirmed, but it is too important to omit. One reason is that it is the second such report in a week. A Taiwan news service reported that 150,000 Chinese soldiers were deployed on the North Korean border on the 9th. That report also is not confirmed and Taiwan’s news services are notorious for spreading disinformation.
Nevertheless, President Xi Jinping initiated a telephone conversation with US President Trump on 11 April. In the context of Chinese warnings to North Korea this week, North Korean test preparations and reinforced American attack assets in the waters off the Korean Peninsula, President Xi’s call bespeaks serious concern that events might escalate quickly. A movement alert for armored and mechanized units is an expensive precautionary measure, evidencing genuine concern.
Chinese military practice calls for drawing on units from outside the crisis zone for use in aggressive military operations. If the reports are accurate, the military orders appear to be precautions against a worst case evolution of the Korean situation. Genuine concern about the ripple effects of an imminent North Korean nuclear test and about how the US might react would prompt the Chinese to increase vigilance and combat readiness.
Civilian activities in the major Chinese cities in the northeast looks routine at this time. No disruptions to civilian normality are evident. Large troop movements would disrupt train schedules and local movement. They also would encumber the local economy. None of that is apparent.
While the nuclear test is likely, there are also likely to be missile launches from the North Korean mainland into the Sea of Japan from mobile launchers. This is customary for the 15 April national holiday celebration. Except that this time there’s a US Carrier Task Force (likely augmented by SSGN’s) in the area and missiles fired in their direction would be considered to be an attack. The Chinese understand this and they know that the US would respond with military force against selected targets in the Democratic People’s Republic of Korea (North Korea – the worker’s paradise).
I’d like to see us sail into Wonsan Harbor and reclaim the USS Pueblo, still docked there.