A Solution to the Hostess Strike 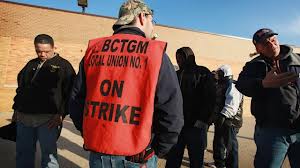 Facebook
Twitter
Pinterest
WhatsApp
Hostess union hopes for buyout that
will put employees back to work
The deluded union strong man, Frank Hurt, of the Bakery, Confectionery, Tobacco Workers and Grain Millers Union made a hopeful statement today (link above) that he felt there was a good chance that the 18,500 workers that his union threw off the cliff would find good jobs if a Hostess buy-out went through.

Anyone who bought Hostess and then set it up in any but a right-to-work state would be INSANE. Why would you invest hundreds of millions of dollars in Hostess, only to use the same unhappy, strike-prone union members to do the work. There are a number of right to work states in the US where you could avoid the problems that Hostess faced.
If the Mexican confectionary giant, Bimbo, buys Hostess, they’d be much better off by baking the treats across the border in Mexico and then shipping to the US. Here is why:
Why would any Hostess buyer want to manufacture in the United States, given all that? Having spent time in Mexico, their bakeries are on par with bakeries anywhere in the world, so quality isn’t an issue.
Union Local 69 and the leadership of the Bakery, Confectionery, Tobacco Workers and Grain Millers Union are lashing out at Hostess management for doing a poor job of leading. While that may be true, those union jobs are GONE FOREVER. But for the union members, I’m sure that you can make minimum wage somewhere without benefits.
In an environment such as the United States, today. No employers need to pay premium wages or offer much in the way of benefits because unemployment, which stands near 10% (in real numbers). The unions backed Obama. Maybe he can find a way to employ all of the angry bakers with federal government jobs.

Union President Frank Hurt receives $263,000 per year for reigning over a union of 83,000 people. I wonder how the now unemployed union members feel about that.