The Shores of Tripoli

Home Blog Post The Shores of...
Facebook
Twitter
Pinterest
WhatsApp
The French Government has assumed principal responsibility for enforcing the no-fly zone over Libya. (DETAILS from Yahoo) and shot down at least one Libyan Air Force jet over the city of Benghazi, where Gadhafi’s loyalist troops are bombing and strafing rebels (apparently with an unholy glee). Gadhafi has tried to take an advantage of a time lag between the imposition of a UN Resolution and the imposition of a no-fly zone to bomb his own city of Benghazi ‘back to the stone age’.

The international outrage over Gadhafi’s conduct includes Italy where Defense Minister Ignazio La Russa has offered seven naval and air bases for NATO forces engaged in the effort against Libya. He said that the Italian government is prepared to offer, “moderate but determined military support”.
The US portion of the effort to protect the rebels from slaughter appears to be mid-air refueling, cruise missile strikes (from surface vessels and submarines) on Libyan airfields, coastal and air defenses and Libyan Air Force infrastructure. The US will also control the littoral portion of Libya to prevent the Libyan navy from attacking Benghazi from the sea. For a comprehensive list of reports from Reuters (CLICK HERE)
For a video of a Libyan fighter being shot down by a French aircraft – (CLICK HERE). 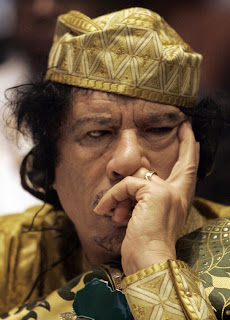 Libyan dictator, Moamar Gadhafi blames “Western powers” for the revolt that has shaken his nation, but the Arab League has called on NATO and “The West” to prevent the slaughter of innocent Libyans at the hands of the ‘unstable’ Gadhafi.