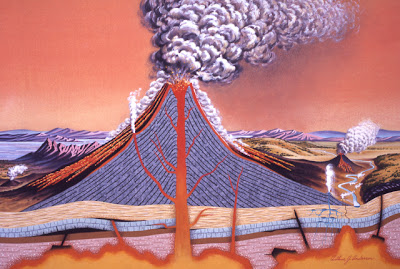 Most earthquakes around the pacific tectonic plate are associated with plate boundary motion, either slip motion (as in So Cal, where the Pacific plate is heading north relative to the North American plate) or subduction (one plate diving below another), which creates earthquakes and volcanoes in places like Japan and Chile.

Yellowstone is unconnected with any of this. Yellowstone National Park is the site where huge caldera eruptions happened 2.05 million, 1.3 million and 642,000 years ago. These eruptions were 2,500, 280 and 1,000 times bigger, respectively, than the 1980 eruption of Mount St. Helens. The eruptions covered as much as half the continental United States with inches to feet of volcanic ash. The Yellowstone caldera, 40 miles by 25 miles, is the remnant of that last giant eruption.
Yellowstone appears to be the current surface intercept of a deep-seated mantle plume. (LINK) Researchers discuss recent seismic imaging that has the plume at over 400 miles deep – for reference, a crustal plate is about 40km deep – at a maximum under the Himalayas its about 70km deep – so the plume at Yellowstone is not a crustal plate feature – it’s at least 10 times deeper. The suggestion is that Yellowstone represents the dormancy of the same plume that caused the flood basalts of the columbia plateau in Washington. The plume has remained stationary as the North American plate moved over it. This is the same reason you have the Hawaii-Emperor chain of islands off to the west of the plume that is currently active on the big island (plume still, plate moving). Bottom line to all of this: Yellowstone plume / caldera volcano and plate boundary earthquakes: completely unrelated and extraordinarily unlikely to trigger each other.
The Yellowstone caldera, like other calderas on Earth, huffs upward and puffs downward repeatedly over the ages, usually without erupting. Since 2004, the caldera floor has risen 3 inches per year, suggesting recharge of the magma body beneath it.
For more background (LINK).
(h/t Mark Richardson)