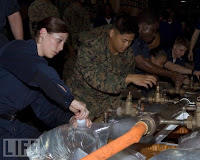 The USS Ronald Reagan Carrier Strike Group is conducting relief operations off the East coast of Japan. Assuming the aircraft carrier is supporting operations points north of Sendai, the aircraft carrier is a minimum of 50 miles (and likely more) away from the Fukushima nuclear plant suffering from radiation problems. As if debris in the water and winds with nuclear radiation didn’t add enough hazards to the relief operations from sea, a winter storm added visibility problems and impacted flight operations yesterday. Specifically, the USS Ronald Reagan was unable to fly any sorties yesterday due to visibility problems, although other ships in the Strike Group were able to conduct relief operations.
The US disaster relief efforts are being focused on Sendai airport and sea port (now closed), which must be reopened so it can serve as a hub for the international relief effort. The Amphibious Ready Group grouped around the USS Essex is dedicated to that project.
Other US Naval vessels are transporting Japanese Self-Defense Forces and their vehicles, supplies and other equipment along the coast and into the impacted area.
The US military is pulling out the stops to support the Japanese recovery efforts in every way possible. Japan is home to many US military service personnel and their families. In a very real way, the US service relief effort is directed toward their home since they live there and their children go to school there.