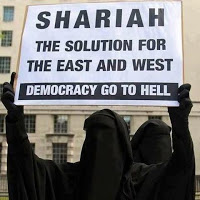 In my experience, roughly 85% of the jihadi types who skulk around in the United States are in the country on student visas. Do they attend school? Hardly ever. That would be work and that’s not what they’re here for. Most never attack anyone, they simply plot, they howl about how much they hate American society — while trying to date ‘loose’ American women, and violating just about every tenant of the Qur-an. Think of the 911 hijackers – students – who went to a strip bar before boarding the aircraft that they flew into the World Trade Center and Pentagon.
The very first thing that these ‘students’ do when they arrive in the US is to form or join with others of their political bent on college campuses and to protest the US.
WHY DO WE ALLOW THEM TO “STUDY” HERE?
Because this is the US, any attempt to filter applications on a rational basis to keep “these people” from being allowed to “study” here would be met with outrage. I can hear it now: “Islamaphobe, prejudice against people because of their national origin, etc.” People in the US have forgotten the difference between extending a privilege (to visit or live here) and a right.
If you go through Israeli security screening for a flight to Israel, their vetting process is not based on making you remove your shoes. They PROFILE you. The US has invested a lot of time and treasure to build profiles on terrorists. Do you think that we are allowed to use those profiles to deny entry? Apparently not since the Tsarnaev brothers and family fit the stereotype completely. Both Saudi Arabia and the Russian Federation warned the US about Tsarnaev and friends. The whole kabal of terrorists (cell) now indicted with the three additional arrests are students from Kazakstan. Do you think that any of them attend classes? 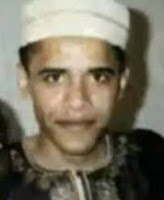 The US taxpayers underwrote the Tsarnaev Family to the tune of $100,000.00 in welfare payments. Therefore you and I are PAYING THE TERRORISTS to come here, plot and murder.
I have to note that not all foreign Muslim students are terrorists. President Obama was a foreign Muslim student when he attended school. The records are officially sealed, but that’s what they will show when they are made publicly available one day. And his father (the deadbeat), Barack Obama Sr. was a foreign Muslim student. Look how Barack Hussein Obama jr. turned out – Nobel prize winner and two-time US President.


Maybe there is hope for the shiftless
Muslim students in the US after all?

Those famous asylum seekers were not students but the current immigration bill currently under consideration in the US Senate will WEAKEN scrutiny of asylum applicants:

(IBD) The law currently says that any immigrant who enters the U.S. — on a tourist visa, business visa or illegally — has one year to apply for asylum and show they are victims of persecution. In 2012, over 40,000 aliens secured asylum, largely from China, Egypt, Guatemala, Pakistan, India and the Soviet Union.

America should undertake a policy of profiling would-be terrorists. Not all Muslims are terrorists, but history and sad experience has shown us that all of the terrorists are radical Muslims. The mainstream media was dealt a severe blow when the Boston Bomber turned out to be a radical Muslim – despite their fervent hopes that it might be a white Catholic housewife from Topeka, Kansas. It’s time that we open our eyes to reality and not allow our enemies to hide behind our penchant for political correctness.

America has been fighting a war against radical Islam for the past twenty years whether or not the Obama Administration wants to admit it. It’s time that we begin to take it seriously.