US Navy Ramps up for Conflict in the Gulf 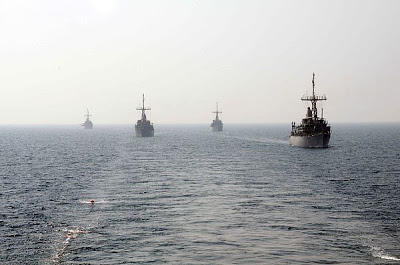 Facebook
Twitter
Pinterest
WhatsApp
It is common knowledge that mines have damaged more U.S. Navy ships than any other weapon since World War II. During the same period, however, the Navy’s focus on mine warfare has waxed and waned. The looming possibility of Iranian mines closing the Strait of Hormuz has once again put mine-countermeasures (MCM) on the upswing. With the likelihood of war between the Israel (and allies) and Iran, navies of impacted nations are beginning to think seriously about the security of tankers transiting this volatile body of ocean. Enter, the International Mine Countermeasures Exercise (IMCMEX) 12, the first of what is intended to be a recurring partnership event.
Yesterday, September 16, 2012, navies from six continents and more than 30 nations kick off the most widely attended international exercise ever held in the Persian Gulf Region, Sept. 16.

“This exercise is about mines and the international effort to clear them,” said Vice Admiral John W. Miller, commander, U.S. Naval Forces Central Command. “Represented here are the best of our individual countries’ efforts dedicated to securing the global maritime commons and I look forward to seeing how this exceptional team of professionals moves forward.”

The Navy’s future MCM force will be based on the stealthy Littoral Combat Ship (photo right) and her MCM mission package which has yet to be deployed operationally. In the meanwhile, the venerable fleet of Avenger Class minesweepers will provide the bulk of this important capability.
Four of the fiberglass-sheathed, wooden-hulled MCMs arrived in the Gulf in June to bolster the four ships already forward deployed to Bahrain. Although the average age of these ships is over 23 years, their hull, mechanical, electrical, and combat systems suites were recently modernized. The installation of new unmanned systems are another way the Navy has chosen to enhance the aging ships’ capability.
Archerfish – Expendable Mine Neutralization System