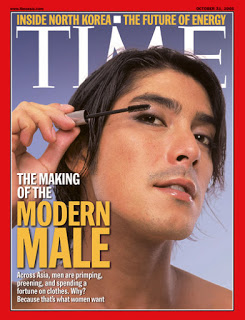 A rigorous and comprehensive meta-analysis of data collected between 1973 and 2011 finds that among men from Western countries, sperm concentration declined by more than 50 percent, with no evidence of a ‘leveling off’ in recent years. These findings strongly suggest a significant decline in male reproductive health that has serious implications beyond fertility and reproduction, given recent evidence linking poor semen quality with higher risk of hospitalization and death.

It’s striking how the dates cited above reflect the dramatic rise of the “metrosexual male”, or “lady boy” as they are often tagged. They are men who do not (openly) identify as homosexual, but could turn tranny and do a Jenner at the drop of a hat. They’re as comfortable in their female partner’s panties (with the junk rolled under and back) as they are in boxers. They drop the toilet seat and urinate from a seated position. 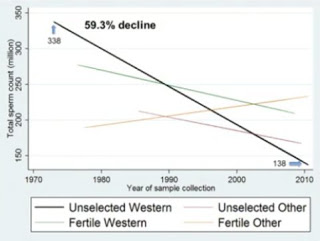 These are the men who buy make-up at the mall and call it “color correcting their skin”, often wear man-buns, and at the same time vigorously assert that they are heterosexual.

In the first systematic review and meta-analysis of trends in sperm count, researchers from the Hebrew University-Hadassah Braun School of Public Health and Community Medicine and the Icahn School of Medicine at Mount Sinai report a significant decline in sperm concentration and total sperm count among men from Western countries. The study is published today in Human Reproduction Update, a leading journal in the fields of Reproductive Biology and Obstetrics & Gynecology.
By screening 7,500 studies and conducting a meta-regression analysis on 185 studies between 1973 and 2011, the researchers found a 52.4 percent decline in sperm concentration, and a 59.3 percent decline in total sperm count, among men from North America, Europe, Australia and New Zealand who were not selected based on their fertility status. In contrast, no significant decline was seen in South America, Asia and Africa, where far fewer studies have been conducted.

The study also indicates the rate of decline among Western men is not decreasing: the slope was steep and significant even when analysis was restricted to studies with sample collection between 1996 and 2011.

I think that it may be useful to test the American Congressional males to see where they are on the curve. No need to test Sen. McCain. He is using the brain tumor defense…and to be fair, it’s not a bad defense. Maybe test Congress for brain tumors (both male and female this time – test Maxine Waters twice) while you’re at it.