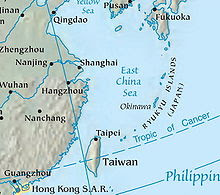 Facebook
Twitter
Pinterest
WhatsApp
Both China and Japan ratified the 1982 United Nations Convention on the Law of the Sea (UNCLOS) and the application of that law is creating a problem in the East China Sea.

On 23 April 23, 2013, Japanese Prime Minister Shinzo Abe vowed to “expel by force” any Chinese landing on the islands in the East China Sea, and promised “decisive action.”

“We would never allow a landing,” Abe told parliament in response to questions from lawmakers, adding: “It would be natural for us to expel by force if (the Chinese) were to make a landing,” he said.

In 1995, the People’s Republic of China discovered the Chunxiao Gas Field in the East China Sea. China feels as though the field exists within their Economic Exclusion Zones (EEZ). The Japanese admit that most of the field is in Chinese territory but that a portion of the gas field is within their territory and that they too have a right to tap into it. The gas reserves on the sea floor are extensive.
In 2008, both nations agreed to jointly develop the Chunxiao Gas field but today the love is gone. The Chinese position has a degree of “mission creep” as they move from the position of joint development to one of exclusivity. Intrusions by Chinese government ships, not navy ships, have increased in frequency and size since the reorganization of the civilian maritime agencies in early March 2013. President Xi’s speech to the National People’s Congress and the recent Defense White Paper leave no doubt about the Chinese leadership’s determination to claim the islands and install facilities (including military defense facilities) on them.

(Nightwatch) Chinese intrusions appear intentionally designed to probe Japan’s military response capabilities as well as the attitude of the Japanese population towards a confrontation with China, while asserting China’s claim. China is arousing Japanese nationalism. With neither side backing down, clashes and tests of political and military resolve are unavoidable.