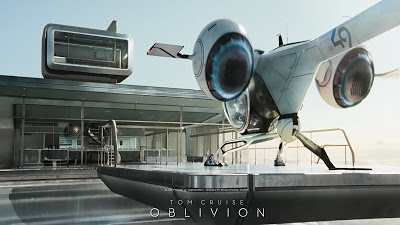 Facebook
Twitter
Pinterest
WhatsApp
No Spoilers
If you are inclined to watch Oblivion, it’s better if you do so without knowing what’s coming next. That’s part of the charm of most good SciFi films. I went to this movie with an open mind and was pleasantly surprised.

In 2017 (not all that long from now) an alien race attacks Earth and all but wipes it out. During the course of the war, the Moon is shattered, resulting in tectonic upheaval and ecological disasters. The Earth employed a lot of nuclear weapons to fight off the alien invaders.
In 2077, Technician #49 (“Tech 49”) Jack Harper (Tom Cruise) is now one of the last few humans stationed on the planet; the other survivors have migrated to a massive tetrahedral space station now in orbit around the Earth. Other survivors have established a colony on Titan (a moon of Saturn). Jack lives in a space age penthouse towering thousands of feet above the Earth where he and his communications officer and lover Victoria (Andrea Riseborough) are part of an operation to extract the planet’s remaining resources for the Titan colony’s use, especially water.
Jack has recurring dreams that are disquieting and suggest that things may not be quite as they appear at first glance. 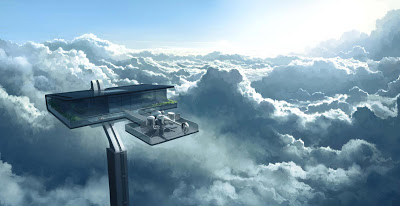 Jack and Victoria underwent a “security wipe” five years prior, which erased their memories and prevents them from giving up information under interrogation. Jack’s primary job is the maintenance and support of ‘drones’, autonomous airborne machines that patrol the landscape to hunt the remaining alien resistance and protect the resource extraction machines. They maintain contact with civilization via a video link with their commander on the space station, and have two weeks left on their tour of duty, after which they will be allowed to join the rest of humanity. (h/t Wikipedia)

Things get really interesting when Jack meets Julia Rusakova (Olga Kurylenko) and the plot thickens further when he runs into Malcolm Beech (Morgan Freeman).
If you are not a SciFi fan, the movie may not blow your skirt up, but I enjoy a good SciFi yarn and I enjoyed this movie.

Recommendation: GO AND SEE IT.