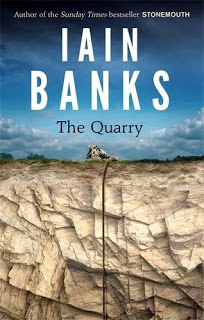 Facebook
Twitter
Pinterest
WhatsApp
You have to be completely cool to enter the short list of my favorite authors. Iain Banks is on that list and he’s tied with a hand full of others who vie for the top slot.
Today, I was most distressed to hear that he’s gravely ill. Some of my distress is found in selfishness because I enjoy his work so much.

(The Guardian) Iain Banks, whose darkly humorous presence has enlivened Scottish literature for 30 years, has announced he is “officially very poorly” with gall bladder cancer and may have only months to live.

Banks, 59, is recovering from jaundice caused by a blocked bile duct. “But that – it turns out – is the least of my problems,” he said on his website.

The author’s trademark deadpan humour was to the fore as he broke the news: “I’ve withdrawn from all planned public engagements and I’ve asked my partner Adele if she will do me the honour of becoming my widow (sorry – but we find ghoulish humour helps),” he wrote.

For those of you who would like to review his work — AMAZON.COM

His last book, The Quarry, has yet to be published. His publishers are trying to bring it out within the next four months so Mr. Banks will be around when it hits the shelves.

(The Guardian – cont’d) The cancer is inoperable. He said  that he and his new wife intend “to spend however much quality time I have left seeing friends and relations and visiting places that have meant a lot to us”.

Banks said he was still deciding whether to undergo chemotherapy “to extend the amount of time available”. He told friends and colleagues about his cancer diagnosis a few weeks ago. “The way Iain has reacted to his situation is not really with a sense of unfairness but more that it’s just the way the universe works, the way matter works, that there’s nobody out to get us, nobody to blame for it all,” said MacLeod. “It’s a very courageous and stoical attitude in his situation. There’s no doubting the style of the man. What you see is what you get, and the Iain who comes across in his books is very much how he is.”

Banks is said to think of himself as principally a science fiction writer who happened to have published a literary novel first. To be completely fair, I prefer his Sci-Fi novels, all of which I’ve read two or three times. Some maybe four or five times, simply because I enjoy his writing style and his wit so much.
http://friends.banksophilia.com