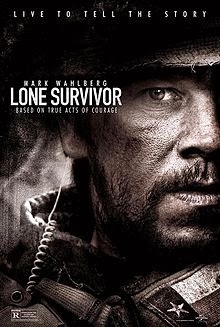 Lone Survivor is based on actual events that took place in Afghanistan in the summer of 2005 during Operation Red Wings. The movie follows the events of Marcus Luttrell’s book Lone Survivor, which details his experience as a member of a SEAL recon element that tracked Taliban leader Ahmad Shah.
Taylor Kitsch – LT Michael Murphy, USNR
Mark Wahlberg – HC2 Marcus Luttrell, USN
Ben Foster – ST2 Matthew Axelson, USN
Emilie Hersch – SO2 Danny Dietz, USN
Early in the operation and in the film, the SEALs are discovered by three Afghan goat herders (an older man, younger man and a boy).  The decision to follow the rules of engagement and release them, led to the attack on the SEALs sparked controversy both within and without the Special Operations Community. Both in the movie and in the genuine situation, the SEALs were plagued by communication problems and LT Murphy earned his posthumous Medal of Honor crawling, severely wounded, to a high point where he could make a telephone call from his insecure SATPHONE.
The Quick Reaction Force (QRF) consisting of two CH-44’s lost one of the CH-44 Chinook helicopters to enemy fire that resulted in the death of the SEAL Platoon and aircraft crew. The loss of so many SEALs on one mission was a blow to Naval Special Warfare and led to finger pointing. Since both LT Murphy and SO2 Luttrell served with Seal Delivery Vehicle Team One (I served with SDVT-1 on active duty over two decades earlier), so I picked up on some of the scuttlebutt in 2005. Most of  it was just that.
War means fighting and fighting means killing. The movie portrays that graphically and I think, fairly. The end of the film shows a Taliban attack on a village and that never happened in Luttrell’s story. It made for good movie action and drama, but that’s about all that it was. In the actual situation, HC2 Luttrell was paralyzed from the waist down and crawled 7 miles to water. Afghan people, showing the compassion and hospitality that they have been known for over centuries,  took him in, and saved his life.
I give the movie ten out of a possible ten. It rates with Saving Private Ryan as one of the best war films of the decade. The production crew went to great pains to make the movie look and FEEL accurate. At the end of the day, war is loud, it’s confusing and for those involved, it moves in slow motion and you get tunnel vision no matter how well you’re trained. You see things from an intensely personal perspective. That can’t be shown properly in a Hollywood Feature because those personal moments simply can’t be captured. Accuracy of any combat event is skewed by the perspective of the individual who did, saw, felt, and reacted. The nay-sayers need to strap on and gear up and experience it for themselves before they criticize too deeply and bitterly.