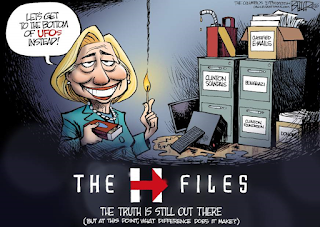 The Clinton Campaign, a racketeer influenced and corrupt organization, is caught again inciting violence against Donald Trump and his supporters during the election. I’m surprised that CNN is covering it because it confirms damning corruption. Note that the Democratic talking head’s reaction to this is interesting. The lady that speaks before Van Jones (a Black Panther) is characterizing “one a criminal, always a criminal” is amusing.
More FBI Corruption

Virginia Gov. Terry McAuliffe’s political action committee contributed $467,500 to Dr. Jill McCabe, and the state Democratic Party gave another $207,788 to her state Senate bid, hoping to defeat an incumbent GOP senator and win control of one of the chambers in Virginia’s legislature.

Dr. McCabe’s husband, Andrew McCabe, oversaw the FBI’s field office in Washington, D.C., which was providing the manpower to investigate Mrs. Clinton’s secret email server at the time of the donations. Mr. McCabe would later be promoted to be deputy FBI director, serving under Director James Comey, The Wall Street Journal reported.
“The fact that this was allowed to occur shows either outright negligent behavior by the FBI or a level of corruption that is beyond belief,” said Jason Miller, a spokesman for  Donald Trump.

Keep in mind that following the campaign, the candidate can keep all of the campaign contributions remaining in their war chest and use it for any purpose. Was it a bribe to a senior FBI official? You decide. Maybe FBI people who follow this blog would like to comment – or not. I understand if you don’t.
I imagine that a field agent would be fired if a spouse took $600K and then they took a lead role in a criminal investigation of the person who “laundered” the money into their pocket. Or maybe not? I can’t say one way or the other these days. The FBI’s problem is that the public doesn’t know whether or not they are corrupt completely or if it only rests at the highest levels of the agency. If Assistant Director Andrew McCabe received $600,000, one can only wonder what Loretta Lynch (AG) and FBI Director James Comey received.