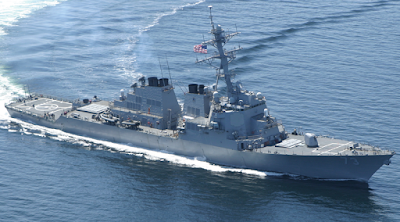 On 21 October, the USS Decatur sailed near Triton and Woody Islands to challenge excessive sea claims. The ship did not cruise within the 12-nm territorial sea.

Note: The USS Decatur did not perform a Freedom of Navigation operation, which would have involved sailing through China’s territorial waters. Instead the US Navy described this mission as a challenge to an excessive claim.

On that same day, the Chinese Ministry of National Defense issued a statement that called the patrol by the USS Decatur “illegal and provocative.” The Chinese navy ships Guangzhou and Luoyang warned the US ship to leave. “This is serious illegal behavior and is intentionally provocative behavior. China’s National Defense Ministry is resolutely opposed to this and has lodged serious representations with the US side.”

Today the Chinese Ministry of National Defense said it lodged an official complaint with the US, after a US Navy guided-missile destroyer, the USS Decatur, sailed through Chinese territorial waters near the Xisha islands (Paracel Islands) without China’s permission.
The Chinese naval behavior and official protest mean that neither side has changed its position, but both decline a confrontation at sea at this time.

Background: On 20 October, the Chinese acknowledged that it stationed air force personnel on Woody Island. Some news services made much of this admission, but China has been open about its military developments on the island, including the deployment of fighter jets. It deployed combat aircraft to Woody Island in 2015 and in April 2016. All aircraft require ground crews and military aircraft usually require military ground crews.

The Chinese have militarized the Paracels since the 1970s. That is not news because China gained control of the Paracels by defeating the South Vietnamese Navy in 1974. Vietnam has never acknowledged Chinese sovereignty and China has maintained defenses on the islands ever since. The airport on Woody Island is a military airport. In March, imagery detected the presence of anti-ship missile launchers. In July, anti-aircraft missile installations were detected.
The Chinese promised to not militarize the artificial islands they have created in the Spratly Islands. However, they have built three airstrips and installed defensive equipment on all seven of their reclaimed islets.
It’s clear that China is intent to claim all of the South China Sea as its own, and for its exclusive use.

Their recent agreement with the Philippines will embolden them further even though the Philippines has not officially given up their claim, they made it clear that it is “for sale”. When you understand the Philippines, this makes sense. And to be fair to Filipinos, Hillary Clinton put the US State Department up for sale to the highest bidder and profited personally from her time in office. It’s easy to look at the Philippines and blaggard them, but Sec. Clinton did the same thing – only worse.