(Fox News) Yves Rossy is making appearances at the Experimental Aircraft Association’s AirVenture in Wisconsin. The child in me wishes that his name was George Jetson.

He’s able to propel himself through the sky at upward of 190 mph, controlling his jet suit with a throttle in his hand. He can go as high as 12,000 feet.

Rossy plans to fly his jet through the Grand Canyon — which would be quite some trick when you consider the tricky wind movement through the canyon (which suspended helicopter flights into the canyon). I’m not saying that he couldn’t do it. Worst case, he becomes a colorful smear on the wall — and the smear will be an added tourist attraction, adding the the economy of Northern Arizona.

“Progressives” are smarter, and they want you to be smart too. In the latest spasm of “progressive nannyhood”, the federal government is hiring what it calls a “Behavioral Insights Team” that will look for ways to subtly influence people’s behavior, according to a document describing the program obtained by FoxNews.com.

Big Brother loves you and wants you to be happy. If only you’d do everything that Barack and his minions say, unicorns and rainbows would paint the sky.

“Behavioral sciences can be used to help design public policies that work better, cost less, and help people to achieve their goals,” reads the government document describing the program, which goes on to call for applicants to apply for positions on the team.

The document was emailed by Maya Shankar, a White House senior adviser on social and behavioral sciences, to a university professor with the request that it be distributed to people interested in joining the team. The idea is that the team would “experiment” with various techniques, with the goal of tweaking behavior so people do everything from saving more for retirement to saving more in energy costs.

Such policies — which encourage behavior subtly rather than outright require it — have come to be known as “nudges,” after an influential 2008 book titled “Nudge” by former Obama regulatory czar Cass Sunstein and Chicago Booth School of Business professor Richard Thaler popularized the term.

Apparently the British government used this program to “nudge” their citizens to embrace Islam and for the most part, it’s been successful. Muslims don’t need to be nudged and the odd beheading or honor killing is generally ignored by the sheeplike Brits? What does it matter?

The British ‘experiment’ that predated their current brainwash program by three centuries, nudged American colonists in the latter quarter of the 1700’s to pay the Crown’s taxes. They landed soldiers and marched through Lexington (pushing aside unhappy citizens) toward Concord to nudge Americans to give up their arms. And it didn’t work out so well in the long run for King George. But it worked out fine for Americans.

Hollywood Report (Where are they now?) 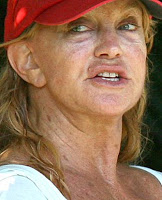 Goldie Hawn must be pushing 70-something, and while she wouldn’t pass for a “fossilized hag” in many people’s opinion, her lifestyle has definitely been catching up with her. Sometimes there just isn’t enough plastic surgery to fix the problem. There’s definitely not a portrait of “Dorian Grey” somewhere taking all of the damage.

Hawn, known as the, “most foul mouthed woman in Hollywood,” had no comment that is printable for this article.

Even though Hawn hasn’t done any acting for over a decade, since 2002 (The Banger Sisters), she still remains a viable speaker at events where she croaks out in her progressive, whiskey voice on behalf of President Obama.

The progressive dream is to make the entire country just like San Francisco. That would mean that no more children would be born in America because the only form of acceptable sexual relations would be sodomy, nobody would work and everyone would be receiving welfare, and every day would be an exercise in “radical self expression”.