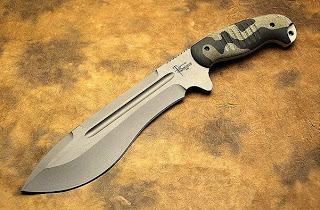 Facebook
Twitter
Pinterest
WhatsApp
Todd Begg makes custom knives in Petaluma, California and now he’s working with his brothers, who’ve never made a knife — and he has a reality series which will serve to make his knives (which some may consider ‘over priced’ ) even more expensive. Todd wants to make knives look as if they were born, not built. beggknives.com
Because he’s making one-of-a-kind knives, his backlog has reached to six years. At up to a quarter of a million dollars per knife, it’s an interesting sole proprietorship.
If you pump the blades out and sacrifice craftsmanship for volume, you risk dropping the price and losing the high dollar buyers.
The Discovery Channel series features Todd Begg, his older brothers, John (fmr. soldier and oil field worker) and Mark (fmr. fashion model).
It’s a new series and the jury is out as to whether it will be self-sustaining in the way that Duck Dynasty or the Kardashians have.

A Personal Note: I have knocked around the custom (also called ‘bench made’ not to be confused with the manufacturer of the same name) knife business since I was about ten years old and have met some of the old knife making legends, such as Gil Hibben (met in 1965 when my grandfather built a rifle for him) and Jimmy Lile. Both Lile and Hibben priced themselves well beyond my purchase point. Not long ago, custom knife legend, Rick Hill (voice from the past), called me and we spoke about a very cool knife that he made for me prior to a deployment that I made when I was in the US Navy. I still have the knife in its original parachute-safe sheath and it’s one of my proudest blades – if not the sharpest. It was nice speaking with him and we collaborated on the selection of a knife that I ended up buying from another source for work in Mexico. It’s difficult to find the right working blade for the right purpose.

My knives may be worth something, but they’re all work tools, not museum pieces or movie props. Buying a knife that I’d never carry or use strikes me as somehow wrong, but that is what collectors do.

So I am not a collector, I’m a user. And I have discriminating tastes. I’m looking forward to see how Todd Begg’s journey through the reality television world comes out, so I will be watching.

Watch with me and post in comments below. Tell me what you think about the Blade Brothers.