Facebook
Twitter
Pinterest
WhatsApp
I give Glenn Beck a lot of credit for being a man true to his message, and true to the principles that has made America great.

As you can see in the photograph below of the Capitol Mall, there are people who have gathered. The mainstream media reported “thousands” even the number is somewhere in the hundreds of thousands. They reported that there are “thousands” at the Al Sharpton Rally across town and there are about a thousand. That’s equal coverage for you…and what one would expect from the mainstream media. 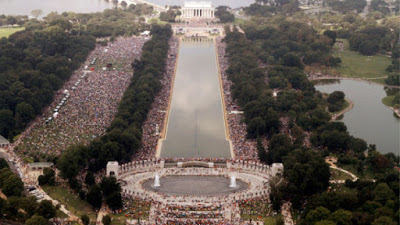 The people who attended were there to make a courageous stand and to declare that faith, hope and charity are not dead, that they’re not something from America’s past — and to the contrary, they are the core of One Nation Under God.
The liberals, the mainstream media and the obama administration would have us remove “IN GOD WE TRUST” from our currency, from our thoughts and from America’s core. The people in the photo would disagree with obama, reid and pelosi.
I don’t know who the next president of the United States will be, but I suspect that it won’t be barack hussein obama.