China tries to School the Norks. 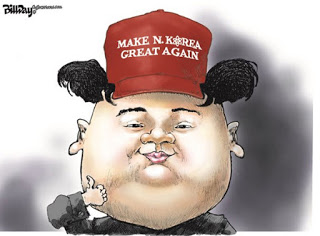 Facebook
Twitter
Pinterest
WhatsApp
I hadn’t planned on blogging today, but I’ve been keeping those who read this blog up to speed with events in China and North Korea. There is some interesting information on that front, so I’ll share it for your consumption.
On 4 May, the quasi-official newspaper Global Times replied to the commentary critical of China that was published by the Korean Central News Agency (KCNA) on 3 May. Even though these two players are batting the ping-pong ball back and forth ‘unofficially’, it’s official enough — and they both know that it is. So does the US, Japan, Russia and everyone else with an interest in the evolving situation between China and North Korea.

The public dispute between these two communist states is without precedent. A report posted on the Daily NK defector web site said that citizens in one border province of North Korea have attended mandatory political instruction lectures that continuously criticize China. They claim China is blocking Korean unification. In criticizing China, the lectures use the same rhetoric previously associated with the US.
Ok, on to the Global Times and what they’re saying:

“This is the third time in recent months the KCNA has published a bylined editorial critical of China. Unlike the first two pieces that did not mention China or any names of Chinese media outlets, this latest one did.”

After summarizing the main points of the KCNA commentary, which you read about on yesterday’s blog post, Global Times provided its counterpoint.

“The KCNA opinion piece contains no new substantive information, except mentioning the names of China, People’s Daily, and Global Times and expressing a stronger disgruntling. It did not mention China’s support for the United Nations sanctions against North Korea. Nor did it state Pyongyang’s next step to take. Overall, the editorial is nothing more than a hyper-aggressive piece completely filled with nationalistic passion.”
“Pyongyang obviously is grappling with some form of irrational logic over its nuclear program. Beijing does not need to engage in a tit-for-tat argument with Pyongyang. However, it should express its own opinions regardless of what Pyongyang has said.”
“Beijing needs to make China’s standing and position very clear to Pyongyang, either on an official or grassroots level. It needs to address with Pyongyang its concerns and bottom line. It should also make Pyongyang aware that it will react in unprecedented fashion if Pyongyang conducts another nuclear test. Beijing should not hesitate in delivering this message, and there is certainly no need to debate this issue back and forth with Pyongyang.
“The differences and contradictions between China and North Korea will not be solved through any sort of argumentative effort. Beijing can see from the KCNA editorial that Pyongyang does not understand the real meaning of ‘national interest’ when it comes to the big picture of Chinese diplomacy. Nor does it understand Beijing’s deep concern for the potential risks posed by Pyongyang’s nuclear tests to people living in northeastern China.”
The editorial concludes with recommendations for higher levels of dialogue to pull North Korea out of the “blind alley it insists on remaining in, especially when the country considers nuclear weapons ‘as precious as its own life,’ as it put in the article.”

The editorial writer wrote that what matters is not what Pyongyang says, but what it does next. China needs more certainty about the positions of North Korea and the US. The concluding paragraph follows.

“The direction of China-North Korea relations remains in the hands of China. Whether KCNA editorials mention China or Chinese media by name or not, those missions will not change the inherent logic and trend of a relationship that has been in place for over six decades. The more editorials KCNA publishes, the better Chinese society will be able to understand how Pyongyang thinks, and how hard it is to solve this nuclear issue.”

Although dismissing point-by point argumentation, the editorial engages in it to some extent. The Global Times editorial treats North Korea as a wayward neophyte who needs more tutelage and guidance.

The editorial writer seems taken aback by North Korea’s identification of nuclear weapons with the life of the state. It is a dead end because the logic of that statement is that North Korea will cease to exist if and when the nuclear weapons are destroyed. That language and position rule out any room for negotiations about the nuclear program.
This is problematic.
It’s in the interest of the planet to thwart North Korea’s nuclear weapons program and China’s amusement at their satrap’s antics has ended. 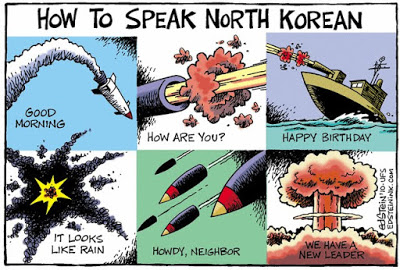 Expect a sixth nuclear weapons test explosion in defiance of China and the US. China will respond by mobilizing its military for a response to North Korea. There are Chinese troops on the border with North Korea, but one more stage of movement is required. It will be accompanied by removing Chinese civilians from the border area. At the same time, China will cut off oil supplies and food to North Korea.
The question of whether North Korea strikes South Korea at this point is one that only a few in North Korea can answer, and I don’t think that a decision for national suicide has been made yet. Though that’s what Kim Jong Un has hinted at.
The US is present to deal with that eventuality if things go that far. China understands this and has green-lighted the US response, which everyone understands may involve tactical nuclear weapons if North Korea goes nuclear against the South – and/or China.