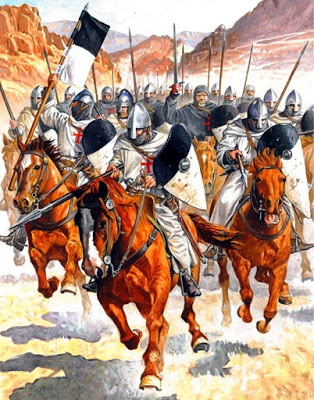 Facebook
Twitter
Pinterest
WhatsApp
The Beauceant was the war flag of The Poor Fellow-Soldiers of Christ and of the Temple of Solomon (Knights Templar). It was not a red cross on a white field as is often shown in film, though the Templars did wear a red cross on a white surcoat. The flag consisted of a black section above a white one. The real meaning of the standard is lost to history but it could be that the black section depicted the sins of the world and the white symbolized the purity that the Templar Order offered the knights.

Whatever the symbolism, the Beauceant held a lot of power to the Templars – while it flew, knights were not allowed to retreat or stop fighting. Over time, during the crusading period, the rules of who rallied to the flag as well as rules on the battlefield, became more complicated.

There’s a lot more to the Templars, of course. They became the greatest bankers in the world, they did not cut their beards or hair (nor did they bathe, based on reports from that period). And in the end, the King of France plotted their demise by colluding with His Holiness, the Pope. 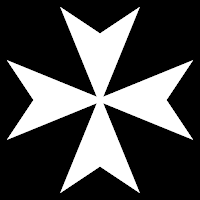 Some say that The Order of Knights of the Hospital of Saint John of Jerusalem (Knights Hospitaler) copied the black and white of the Beauceant and incorporated it into the white cross on the black field that they wore on their surcoats (also called a herigaut or gardecorps) and shields. Sometimes this order are also referred to as the Knights of Malta, in which case, the cross is referred to as the Maltese Cross. There’s a lot of complex history here and I’m not going to delve further, except to say that the Germans adopted this iconography during the First World War.