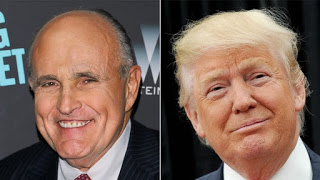 Facebook
Twitter
Pinterest
WhatsApp
RUDY  GIULIANI  – RESPONDS TO HOLT AND CLINTON
During the recent debate some inner voice made me want to step through the television and onto the debate stage and ask Hillary Clinton (a lawyer) to tell me about Terry v Ohio when she said that stop and frisk was unconstitutional, backed up by Holt, who is now revealed as just another of Hillary’s  flying monkeys. Mayor Guiliani responded to the Bitch of Benghazi today in the WSJ. But the bell was rung at the debate with the standard bogus fact checking by a shill for Clinton. It’s what we’ve come to expect from the mainstream media during debates.

It makes me wonder how Anderson Cooper, a homosexual, will treat Trump in the next debate, given that Hillary is so heavily pro-Muslim. They would execute Cooper if he showed up in Iran, Saudi Arabia, Yemen or any other serious Islamic state, for being a Sodomite.

(Wall St. Journal) One of the strategies that helped bring about an 85% reduction in crime in New York City between 1994 and 2013 was the careful and appropriate use of “stop and frisk.” This practice dramatically reduced the number of guns, knives and other dangerous weapons, as well as illicit drugs, in the city.

But according to candidate Hillary Clinton and moderator Lester Holt during Monday night’s presidential debate, stop and frisk is “unconstitutional.” They are wrong. In Mrs. Clinton’s case, it’s the usual misrepresenting she does when she does not know what she is talking about. As for Mr. Holt, if a moderator is going to interfere, he should do some homework and not pretend to know the law when he does not. Mr. Holt and NBC cannot overrule the U.S. Supreme Court.

That last bit was news to me. NBC/MSNBC overrules the US Supreme Court all of the time and gets away with it.  You can read the whole article (cited above), continuing…

During the debate, Donald Trump described the history of the case correctly. He said that after the judge decided the case, the city appealed and asked for a stay of the lower court’s decision. The Court of Appeals for the Second Circuit, in a scathing opinion, criticized Judge Scheindlin for improperly steering the case to her courtroom. It issued an unusual stay to allow the Bloomberg-Kelly form of stop and frisk to go forward until the court could decide the appeal. And in a rare action, it removed Judge Scheindlin from the case.
The Second Circuit Court of Appeals decision underscores Mr. Trump’s position that stop and frisk is constitutional and plays a critical role in saving lives. The Court of Appeals issues a stay or injunction only if there is a likelihood of success on the merits for the appeal and the lower-court ruling will create irreparable damage. The likelihood of success means the court believes there’s a good chance that the judge’s ruling of unconstitutional as applied was going to be reversed. And irreparable damage means that the court came to the same conclusion as Mr. Trump, that stop and frisk plays a critical role in reducing crime.

(Fox News) There is an interesting aspect of this story, which blew up after Hillary Clinton very deliberately mentioned Machado at the end of the presidential debate on Monday. As it turns out, sympathetic mainstream media outlets had been working on profiles of Machado since last week, causing some to wonder if the press was coordinating all along with the Clinton campaign.
Let’s take the time machine back and see what CNN said about Ms. Machado: 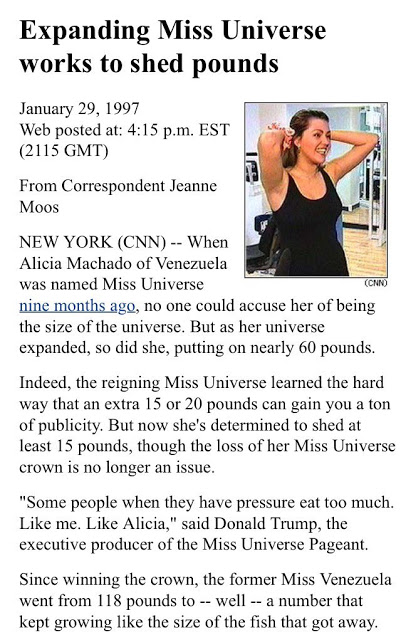 I wonder if Lester Holt and Hillary Clinton will apologize for LYING in the debate? Yeah. When pigs  fly. 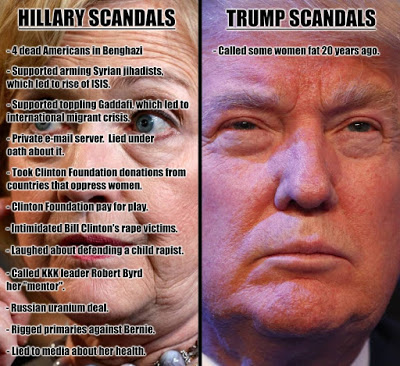