Wars and Rumors of Wars 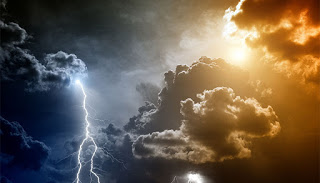 The War on Weather
The war on the weather has taken more dramatic moves this week as Barack has ordered that the CIA’s international focus give precedence to the weather. It’s a real head-scratcher, folks. Hopefully by November 9th, that sort of foolishness will be relegated to the back-burner.
I can’t help but think that the long monsoon that Texas has gone through this summer  (as a result of LSP’s congregation of farmers praying for rain), must have something to do with it.

(Scientific American) President Obama moved toward solidifying his climate change legacy this week by requiring federal defense and intelligence agencies to consider the effects of a warming planet on national security in the policies, plans and doctrines they develop.

The executive order, issued yesterday, comes in the form of a presidential memorandum requiring 20 federal agencies to collaborate to make sure decisionmakers have the best available information on climate change impacts and their potential threats to national security (E&ENews PM, Sept. 21). The agencies are as varied as NASA and the National Oceanic and Atmospheric Administration, which gather scientific observations on climate, and the CIA, the National Security Agency and the Department of Defense, which analyze intelligence and develop national security policy.

The FBI is exempt from those orders, apparently, because they have their hands full cleaning up after Hillary Clinton, which is akin to a toxic spill all on its own.

I had dinner with friends last night who asked me if I had anything good to say about Barack. I couldn’t find a single thing.
Thoughts on Syria and the Middle East
The situation in the Middle East is very complicated, made more so by the number of major players (the Russians, Turks and Americans) all of which have their own agendas. The locals, Iran, Saudi Arabia and Israel have their agendas as well and as one would expect, NONE of those agendas match.
A Clinton presidency would be the same as the Obama presidency – years of bleak, muddled thinking. A Trump presidency would have a different mandate from voters – but the form that will take in terms of real political change in the Middle East eludes me (I confess). The Obama Years have broken the machine and I don’t know that even an energetic Trump Administration working non-stop for four years can repair the damage of the Obama regime.

Iranian President Rouhani said on 27 September that Iran would continue to back Syria in its fight against “terrorism” and in establishing security in the region. Last week, on the 22d, Major General Safavi of the Islamic Revolution Guards Corps (IRGC), said that Russian airstrikes against Aleppo were based on information provided by IRGC advisors, Lebanese Hizballah and the Syrian Arab Army.
Lebanese Hizballah leader Hassan Nasrallah commented that there was no possible political solution for Syria as the conflict was getting more complicated in the aftermath of the collapse of the US-Russian ceasefire agreement.
News services reported that Syrian ground forces launched multiple local offensives against Syrian rebel-held enclaves in Aleppo. The main action, however, was the bombing campaign.
As has become customary, President Rouhani put the context for Iranian support for Syria in its largest regional setting. Iran sees itself as acting as the guardian of regional security.
General Safavi is the military advisor and aide to Supreme Leader Ayatollah Khamenei. He speaks with the authority of the Supreme Leader. His comment is the first recent update on the information exchange among the supporters of the Syrian government.
The Russians announced last year that they intended to establish an intelligence exchange mechanism with Iran. Safavi confirmed that it is operational and effective, but hinted at a closer relationship than actually is known to exist.
Nasrallah’s statements are almost always insightful as well as blunt. His message is twofold. First, the situation is too complicated to consider all the variables and to accommodate all the players in a ceasefire agreement. His statement implies that no political solution is reachable until the situation simplifies. That judgment begets his second point: that there is only a military solution.
Comments: Putting US troops into this sewer makes no sense to me. We will lose more good young men and in the end will have nothing to show for it. I’ve seen a lot of small wars in my time, and a few big wars. And I ask myself, what all of that blood and treasure, dumped into places like Syria and Iraq have accomplished. I end up with the depressing sum of “next to nothing”.