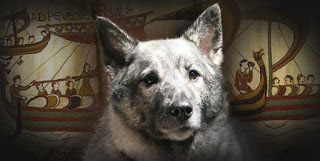 Facebook
Twitter
Pinterest
WhatsApp
A Viking Dog’s Life
Being a dog under normal circumstances in the present is like being a small child that never grows up. Or if you live in Korea, you’ll end up the main course in a BBQ meal. (different cultures, different customs)

However, if you were a Viking Dog, you fought in the shield wall and were turned loose on the enemy and tear them up with your fangs. (not unlike LSP’s dog, Blue Avenger, who did that to the FEDEX man and was put into dog custody)
When your master died, you were dispatched to take out his enemies on the ‘other side’.

Viking Dogs Followed Their Masters to Valhalla – Large amounts of animal bones have been found in Viking Age ship graves. For example, there were eight large sighthounds (Old Norse: mjór) buried on both sides outside the ship In the Gokstad burial mound (c. 900 AD). A small lapdog was also buried inside the longship.

For some reason it would seem to me that a Viking Dog had a more meaningful life than most dogs these days. (to swipe a quote from Hollywood) Their masters crushed their enemies, saw them driven before their army, and heard the lamentation of the women. (sigh) Those days are gone for man and beast.
Freedom of Navigation

On 10 October, the Arleigh Burke-class guided missile destroyer USS Chafee (DDG-90) conducted a freedom of navigation operation in international waters near the Paracel Islands.
The news reports did not name the islands near which the US ship passed. This was the eighth such operation since October 2015 to challenge excessive Chinese maritime claims. It was the fourth during President Trump’s administration.
The last freedom of navigation operation was in August in the Spratly Islands. The last operation near the Paracels was in July near Triton Island.
The Chinese Foreign Ministry did not comment on this operation at the daily press session. Maybe China feels confident enough in their ownership of the South China Sea that they’re not thumping their chests because an “imperialist warship” is exercising the right of innocent passage on ‘their ocean’. It takes a lot of balls to claim an entire ocean. It’s not as if they weren’t fishing the place out already.

The Syrian Arab Army claimed to have made significant advances in Deir ez-Zor, after launching a large-scale assault inside the provincial capital. Supported by Russian airstrikes, the Syrian army stormed the Islamic State’s positions and captured most of al-Arfi neighborhood.

Russian military spokesman Major General Konashenkov said Russian aerospace forces flew 180 missions in the prior 24 hours. One Russian Su-24 crashed on takeoff.
West of Idlib, Turkish-backed Free Syrian Army forces reported heavy fighting and stiff resistance by the al-Nusra Front -led rebel coalition.
If you find it difficult telling the players apart, imagine if you were there on the ground…since a lot of these people turn-coat or are paid by different hosts (Turks, Russians, Americans, ISIS, Saudi/Al Qaeda, etc.) at the same time.
Multiple news services reported that Islamic State fighters are fleeing Deir ez-Zor by trying to cross the Euphrates River. Deir ez-Zor city is located on the west bank of the river. US-backed Syrian Democratic Forces had been located on the east bank of the river. The river was the informal boundary between the Syrian forces and US-backed fighters.
One thing is certain: War is a racket. That means that when this current war against ISIS is over, there will be another war. The military industrial complex demands it.