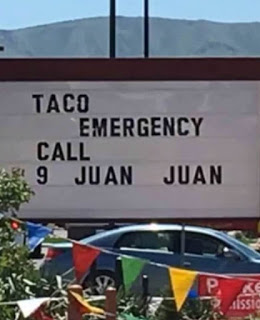 The Columbus Day festivities are over (sigh), and the empty pizza boxes are headed for the landfill. And while you all sit in the lap of luxury, I’m south of the Border, making the world safe for democracy. No need to thank me verbally, just send US currency (large denominations are fine) or gold. I’ll accept silver bullion if you prefer.


While I’m on the road, I leave you with a few observations.
Yet another California Landmark
California health care workers who “willfully and repeatedly” decline to use a senior transgender patient’s “preferred name or pronouns” could face punishments ranging from a fine to jail time under a newly signed law.
I can’t think of a worse fate than being thrown into a rest home that smells of chlorine bleach and shit while I’m waiting to die.

And you know that I would NOT relinquish firearms without a gunfight. Better to inject me and leave to croak quickly.

However, this new law brings hope. The care workers would be forced to call me “Ming the Merciless“ or “Your Majesty” since those are preferred names of mine. There is a long list, but this would be a place to start.

(Fox News) “It shall be unlawful for a long-term care facility or facility staff to take any of the following actions wholly or partially on the basis of a person’s actual or perceived sexual orientation, gender identity, gender expression, or human immunodeficiency virus (HIV) status.”Among the unlawful actions are “willfully and repeatedly” failing to use a transgender person’s “preferred name or pronouns” after he or she is “clearly informed of the preferred name or pronouns.”

The law states that if provisions are violated, the violator could be punished by a fine “not to exceed one thousand dollars” or “by imprisonment in the county jail for a period not to exceed one year,” or both.

I’d be a terror in a rest home. I have tradecraft skills that would amaze and dazzle the staff. It’s remarkable how many different types of poison gas and bombs one can construct from cleaning supplies. And you know that I’d have old friends smuggle in ricin resin.  Best kill me first.

The Western US has burned badly this past summer and has only underscored my plans to make the White Wolf Mine project (located in a ponderosa pine forrest) as fireproof as possible. I’m also putting in a fire suppression system that runs on a second well with a large capacity tank, designed and prepared for that very purpose. I understand that it won’t stop a firestorm, but we get a lot of lightning strikes on the tall trees in the summer and I want the capacity to put out the fire quickly. I’m not saying that the system is cheap. But I think that it’s necessary.  I’ll run some fire mains that I can connect hose to.

The notion of a log home, while cool, and understanding that logs themselves tend to be fire-resistant, bothers me.

I have a lot of work ahead, clearing the pines, pinions, junipers and the oaks up to 5′ off the ground and abating brush to the extend possible. That and the fire suppression system may save my place? Maybe. Eternal vigilance and preparation are the cornerstones of my philosophy…against fire, foes and famine.