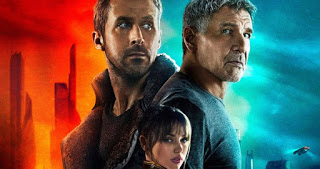 [from trailer] Every civilization was built on the back of a disposable workforce, but I can only make so many.

If you never saw nor enjoyed the original Blade Runner, I don’t know what your take on this sequel will be. The film is visually stunning, but that may not be enough to hold your interest.
The concept of the film revolves around the production of ‘replicants’, androids that are built on human DNA and are designed for off-world labor where the replicant humans die creating new worlds instead of risking human life. As with the original Blade Runner, this sequel takes place on Earth.
The action plays out 30 years after “blade runner” Rick Deckard (Harrison Ford) gave up chasing down androids and fell in love with one instead. Through this dystopian swamp, Ryan Gosling’s “K” walks in Deckard’s footsteps, tracking down wayward androids and “retiring” them. “How does it feel?” asks Dave Bautista’s Sapper Morton, taunting this deadpan hunter that he can only do his job because he’s “never seen a miracle” – an enigmatic phrase that will haunt K (and us) as he attempts to unravel its meaning.
After years of being an unflappable killer, the “Constant K” is experiencing doubts about his job, his memories and his nature. “I never retired something that was born,” he tells Lieutenant Joshi (Robin Wright), musing that “to be born is to have a soul”. Joshi is unimpressed, insisting that in this line of work, you can get along fine without one.

Such existential anxieties are at the heart of the film, which has the confidence to proceed at a sedately edited pace utterly at odds with today’s rapid-fire blockbusters. Mirroring and inverting the key themes of its predecessor, Blade Runner 2049 swaps unicorns for wooden horses while retaining the visual grandeur that fired Scott’s film. From vast landscapes of grey rooftops and reflectors, through the rusted shells of post-industrial shelters, to the burned-ochre glow of radioactive wastelands, cinematographer the movie conjures a twilight world that seems to go on for ever. Bright candy colours are restricted to the artificial lights of advertising and entertainment.

I like a plot that is difficult to read at first, that is revealed as the movie marches forward. This, to me, is the strength of Blade Runner 2049. I’m not going to engage in spoilers here because part of the fun of this movie is peeling the onion. As the layers come off, the revelations unfold right up to the last five minutes of the show.
Should you see it/will you enjoy it?
I suggest that you watch the original Blade Runner first if you haven’t seen it in a long time because so much of this film draws itself from the original.
If you don’t enjoy science fiction, you won’t like the movie. It is genre specific.
I personally enjoyed it. It’s a long movie, but it held my interest even though the pace is slower than in the block busters that the movie going public has become accustomed to. Savoring the moment and trying to work on the plot and what is actually happening is important to enjoying the film.