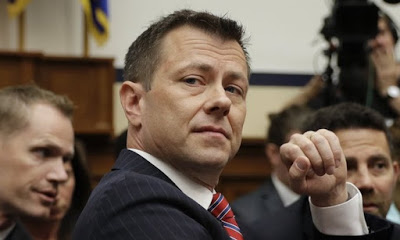 How dare the NFL build stadium walls to keep fans that haven’t paid for a ticket from entering the game. TEAR DOWN THAT WALL…

About half of the FBI special agents who I worked with and around reminded me of Strzok. Now he is the face of America’s FBI. Justice or karma (or both)?

I’m not saying that they’re all arrogant, corrupt, liars who work hard to take down an American president. But the pattern that has emerged of the FBI covering up in front of Congress has one of those disturbing vibes. Doesn’t it?
Strzok and his mistress engaging in pillow talk about how they will stop one candidate in favor of another. And the FBI’s institutional practice of NOT recording interviews so that they can write down what they THOUGHT that you might have said should give the nation pause.