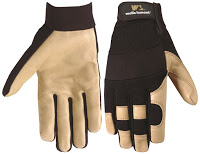 Because I’m an infidel, I think that if I worked at TSA, or if I was back in harness, I’d be wearing these Wells Lamont 3214 Work Gloves with Grain Pigskin, Spandex Back, Hook & Loop Wrist Closure. It’s like packing a BLT in your lunch box every day just to keep square with the world. Because if you are going to search a haji for weapons, there’s nothing like wearing pigskin gloves to get your message across.
MK V
When I was in the Navy, we used the Sea Fox, small boat. I don’t know of anyone who liked the Sea Fox beyond the people who sold it to the Navy. I’m sure that Uniflite Inc, (Bellingham, WA) who built it and foisted the 36 ft. fiberglass boat it on an unsuspecting Navy loved the money that they made.
I had the opportunity to take a ride on the newer MK V recently (joy ride) and check them out. They are a massive improvement over the smaller and generally worthless Sea Fox, which deployed from a boat trailer.
When the Joint Special Operations Command was created (run by the Army) took over the SEALs, the generals asked what the Navy wanted. At the time, much of the equipment that was in use dated back to World War 2. The Navy didn’t care much for the SPECWAR community and the budget showed. Things began to change, but not as fast as many would like. The MK V came out of that wish-list session
Some people said that the Sea Foxes did not deploy to the Gulf (First Gulf War) but we did have them on trailers at Ras al Mishab. They were never removed from the trailers, but they were there on site. The boats used in Gulf I were Fountain high speed boats, two of them had been drug seizures, re-purposed for Navy use. There were several design flaws in the old Sea Fox. The bow design was sloped to allow a clear view while transiting at speed, unfortunately this led to the boat plowing and even shipping water over the bow at wakeless speeds. Sea Foxes also had a tendency to dive, becoming momentarily (TOTALLY) submerged when operated in heavy seas. With or without a SEAL squad/platoon onboard it was not uncommon for SeaFox sailors to earn their dolphins or become submerged while in heavy sea states. This led to a number of injuries over the operational life of the Sea Fox and at least one fatality (in the Philippines).
For Blog Reader Dr. Jim: The Seafox had an LN-66 navigational radar, a HF/VHF radio, an avionic UHF radio, IFF and an AN/APR-39 ECCM radar detector. It also had a gyroscope compass.