The Elites are Concerned 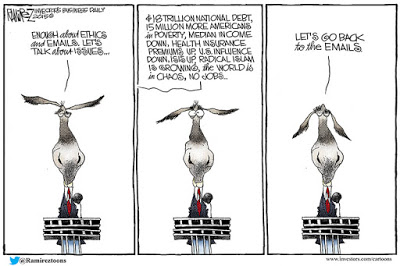 Facebook
Twitter
Pinterest
WhatsApp
Imagine being the captain or first mate of a slave ship back in the days of sail – and you’re hauling slaves from Africa to the Sugar Islands to keep up one leg of the molasses-to-rum-to-slaves triangle of commerce. Suddenly, you hear the pitter-patter of hundreds of unshod feet and languages spoken that you don’t understand on the deck overhead.
That is what the political elite of the Republican Party are hearing, and it’s none too comforting. They make a living by keeping their own little club intact and in power. (Fly over country only matters for votes. They needn’t pay attention to what the great unwashed want) The elite are very well paid by lobbyists and special interests who will expect the party to vote the way it’s paid to vote.

Frustrated by the fat cats who have ignored the will of their constituents, those people who vote have the temerity to support non-politicians for office, threatening the very fabric of pay-to-play that supports the kleptocracy.

Mitt Romney (who I like personally as a guy) is making a showing now as the party elite are trying to make a play against Donald Trump and Ben Carson to retake their beloved rice-bowl. I don’t find it surprising that they’ve pulled him out of retirement to stump for Jeb! who can’t draw a crowd of more than a hundred or so without paying people to show up and hear him pontificate. I don’t think that it will work. The tread of native feet on the deck means that you can’t stuff them back into the hold of the slave ship and chain them up again…

I’m sure that Mitt is happy to be asked out of retirement to help, but it’s a sign of desperation in the same way that Biden is.

Because, it’s not only the Republicans who are worried.

The Democrats were so sure of Hillary Clinton that they beat down any other voice, allowing only those straw men who posed no threat to another moribund Clinton Administration to run against her. Another Clinton serves the same special interests that feed the Republicans in an ongoing scam where the public can’t help but lose.

Biden is in the bull pen in case that the old Bitch of Benghazi is indicted as a result of the ongoing political scandal. He will enter the race because if Hillary falls for any reason, the Democrats are stuck with Bernie Sanders, who only became a Democrat to run for office. He’s another outsider. The details of the tectonic shift that’s going on are obvious unless you’re in denial.

The Summer-of-Denial has passed and the outsiders are soundly ahead of the insiders.

Polls show that most Americans believe that Hillary Clinton is a liar. Maybe the American voter isn’t quite as stupid as I thought they were. 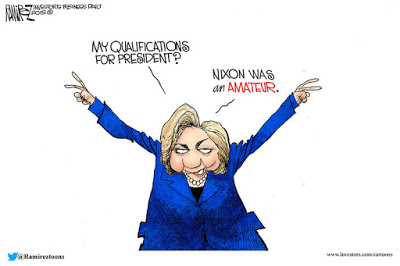 Americans are fed up with politicians, their handlers, and the whole rotten mess.