In Arizona (a Sunday Sermonette) 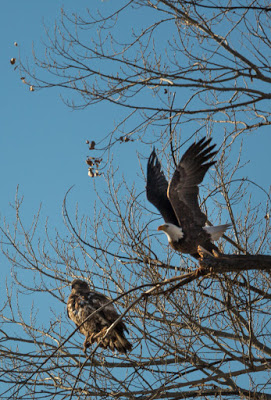 Facebook
Twitter
Pinterest
WhatsApp
The observations of a refugee from California
(1) Eagles are nesting in the area. The juvenile bald eagles, or eaglets are born a light gray and turn brown in color. It isn’t until they are 4 – 5 years old that the iconic white head and tail feathers appear. Bald eagles can live to be 35 years old or more. (photo right)
(2) Workmen show up to saw, paint, pour concrete and adjust this or that. At least half are open carry with the Colt 1911 being the preferred weapon, though there are Sigs, Glocks, etc. The other half are CCW. None of the workmen are illegal aliens.
(3) Waitresses bring plastic drinking straws. They don’t mutter under your breath when you ask for one and speak to co-workers about the angry old man who demanded to murder the planet, sitting over in booth 7.
(4) Mama white tail deer (Joey and Elmer’s mother) doesn’t have a name. I just refer to her as “Mom”. (photo below) She and her family stay in a relatively small area about half a mile on a side if it was a box. They are constantly being hunted by the mountain lions. More on the lions below.
A dash cam is nice, but you don’t see other cars on the road much. You do need a camera for wildlife.
(5) A Trump hat is a sign of enlightenment (at least in the part of AZ where I live) and people high-five you when they see you wearing one. Both the hat wearers and the high-fivers wear Colt 1911’s in quickdraw holsters. They have AR-15’s, Marlin 45-70 lever actions and shotguns loaded with rifled slugs in their pick-up trucks. None of them think much of the people inside the Washington DC Beltway. A surprising number of them are retired USAF fighter pilots.
(6) People still offer to give me a cat. I have cats. They’re outdoor cats. And if they catch me unaware, they will eat my entrails while I’m still living. Fortunately they have a taste for venison. Speaking of which, I’m worried about Judy (doe mule deer) who hasn’t been seen for a couple of weeks now. She’s getting up in years and the lions – are cats, who are getting ready to give birth, which makes them hungry cats.
(7) Typhus is not a concern. Neither is bubonic plague. Both are carried by rats, which abound in the inner cities these days where residents cater to panhandlers and bums and encourage medieval diseases to return. (more from CW at Daily Timewaster). If there was an abundance of rats, the bobcats, coyotes, mountain lions, eagles, hawks, owls and the wolves that have been reintroduced to the area here would eat them. That’s how it’s supposed to work, and it may not sound progressive to you if you’re living in your mom’s home, unemployed, wearing a onesie and drinking coco. You need to watch “Willard” (film).
(8) I’m an hour drive in any of four directions from ‘civilization’. That means that I need to have a shopping list when I go into town for supplies. I have propane heat and electricity, but I have been chopping and splitting wood for next winter. The wood needs to season before I can burn it properly.
(9) People call this place God’s Country when I speak to them about it. I suggest to you that it’s more of man’s proper place in the world. I am not a hunter gatherer and I do benefit from civilization, but I am far removed from traffic jams, homeless bums and junkies, and troubled Muslims (if you recall, they built a mosque down the street from my house in California, prompting the early notions of CALEXIT). There are eagles outside in the trees and there is the occasional lion looking to eat Joey or Elmer (white tail deer yearlings).

(10) I admit that I live in a pine forrest and that it can burn down. My house was nearly taken by a fire last summer while under construction. There’s always a serpent in Eden.